WestJet shares up on soaring profits and dividend news

WestJet (+4.5%) was the day’s strongest gainer after strong 3Q results and news that it plans to start paying dividends. The stock was among the most actively traded on the TSE after 760,000 shares exchanged hands.

WestJet shares gained 4.5% yesterday to close at CAD13.36, their highest level since early May-2010. The Calgary-based LCC reported strong quarterly results yesterday, with profits soaring 72% to CAD54 million or CAD0.37 cents a share, which outperformed analyst estimates. Revenue for the period increased 14% to CAD684.6 million. The quarter marks WestJet’s 22nd in the black.

Shares in the airline were also boosted by news it plans to pay its first-ever quarterly dividend of CAD0.05 cents on 21-Jan-2010 21 to shareholders on 15-Dec-2010. The company it will buy back up to 7.26 million (5%) of its outstanding stock over the next year.

The airline also announced a positive outlook for the rest of the year. Fourth-quarter capacity is expected to increase 13-14% year-on-year and RASM is also expected to perform well. WestJet will also introduced a CAD20 luggage fee for a second piece of checked luggage, which it expects to help with dividend payments.

Shares in Virgin Blue gained 3.6% yesterday as the Australia sharemarket hit a five-month high. The Australian Federal Government has stepped yesterday in to advocate for Virgin Blue 's proposed tie-up with Etihad Airways, with a submission to the ACCC.

Virgin and Air New Zealand have already won over several opponents to the proposed deal, including Wellington Airport and a group of business leaders, by promising to increase capacity and flights on the New Zealand-Australia route. The Australian Competition and Consumer Commission  (ACCC) has requested Jetstar  provide details of its domestic and Tasman expansion plans for the next three years as it considers whether to allow the alliance between Air New Zealand and Virgin Blue.

Freshly-listed Cebu Air fell on further profit-taking in Manila, down by 3.4% to PHP119.80 per share. The airline LCC is below its IPO price of PHP125 per share. 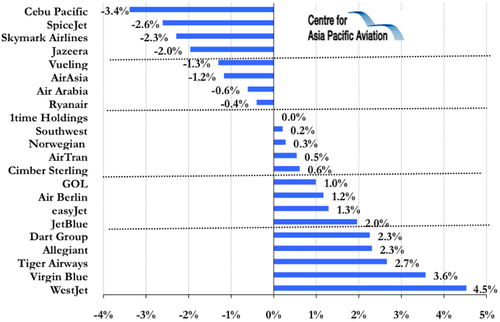