WestJet's shares gained 4.1% on Friday, the day after the Canadian LCC stated it has reduced its full price fares by an average of 25% for all flights across its entire 68-city North American schedule.

The carrier also introduced new "everyday value fares", which, according to WestJet, have an "enhanced pricing structure that reduces the volatility that has been present in the airline industry by providing lower fares across their entire schedule (330 days ahead of departure)".

The carrier’s Executive VP Strategy and Planning, Hugh Dunleavy, commented that the move “reasserts our value leadership position to our guests”, adding: “Feedback from our guests shows that they are frustrated at the unpredictability of fares with seat sales only available up to a few months in advance. WestJet is listening and has responded by providing guests the opportunity to book great prices across the entire schedule. As part of this new strategy, fares at the higher end of the spectrum will be reduced. For those guests who, for one reason or another, have to travel at the last minute or at peak travel times like Christmas, we've significantly reduced those fares to make them more affordable”.

The reduction in higher-priced fares is seen as part of efforts by Canada’s second largest carrier to grow its market share, particularly in eastern Canada. The LCC has recently pledged to become one of the top five international carriers by 2016.

Meanwhile, shares in GOL gained 3.4% on Friday. On the same day, Zacks Investment Research maintained its “neutral” recommendation on the Brazilian LCC, stating it remains better positioned to capitalise on the growth of discounted air travel in Brazil and the rest of Latin America, given its strong market share and efficient operations. Zacks added that the company has been delivering positive and increasing operating profit for the last seven consecutive quarters.

Zacks also commented that the carrier’s improved revenue performance has been a result of its competitive advantages in relation to greater flight frequency between domestic airports, low-cost leadership, and strong indicators of on-time record, regularity, safety, and differentiated client service, as well as increased demand from the domestic and international markets. However, Zacks warned that competitive pressure and the uncertain economic environment is a source of concern.

Meanwhile, shares in the US LCCs were all weaker on Friday, with AirTran, Allegiant and Southwest all weaker, slipping 1.1%, 1.0% and 0.9%, respectively. 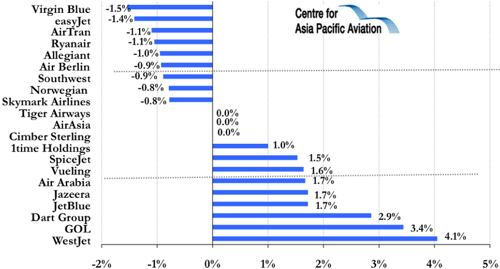