The weaker result nevertheless prompted CEO, Sean Durfy, to state that the Canadian LCC was “once again one of the top performers in the North American airline industry”. Mr Durfy added that he was “ecstatic and extremely pleased" with the results, noting the LCC's ability to remain profitable during 2009 shows its “business model works even in the darkest times”.

Looking forward, Mr Durfy commented that the carrier is expecting continued pressure on fares in 1Q2010 (with RASM tracking for a year-on-year decline of less than 5%), but added that it expected continued profitability in 2010.

AirAsia X has an equal mix of profitable and non-profitable routes: CEO

AirAsia X CEO, Azran Osman-Rani, stated the carrier now has an equal mix of profitable and non-profitable routes, with the carrier’s Taipei service breaking even after six months of operations. Mr Osman-Rani expects the London service will need between 12 to 18 months until it breaks even. Mr Osman-Rani added that plans to launch services to Incheon and Sydney were “critical for our own business, for us to sustain our business model”. Shares in AirAsia X parent, AirAsia, slipped 1.4% yesterday.

Meanwhile, Russian billionaire, Alexander Lebedev, denied reports by Die Pressie that he was considering acquiring a stake in NIKI. NIKI is currently in “advanced talks” with existing shareholder, Air Berlin, regarding the German LCC increasing its stake in NIKI. 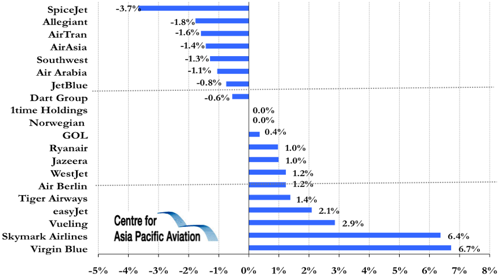