Canada’s two largest airlines, WestJet and Air Canada, both reported increased passenger traffic and capacity in Nov-2010 with the largest gains being witnessed by WestJet with traffic (RPMs) growth of 17.9%. This represented the 15th consecutive month of traffic growth for the Canadian LCC.

While no passenger number data was provided, WestJet noted that it flew an additional 117,000 passenger in the month, as its capacity increases were absorbed by “healthy demand”. WestJet President and CEO Gregg Saretsky added that the carrier is “encouraged by the strength of bookings from the business market and the demand for WestJet Vacations packages". 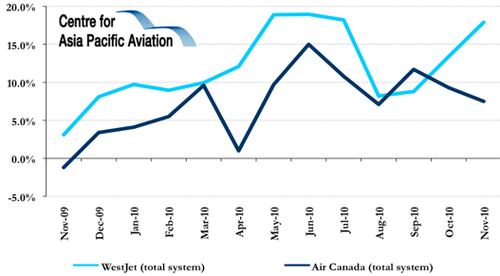 Meanwhile, growth at the smaller Porter Airlines stood at 38% in the month. The carrier expects to post record passenger numbers in 2010. Porter President and CEO, Robert Deluce, said:  “Porter is progressively building market presence in 2010. As the year draws to a close, revenue metrics are strong and we will post record numbers in many categories.” 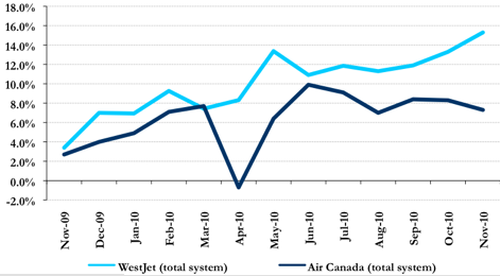 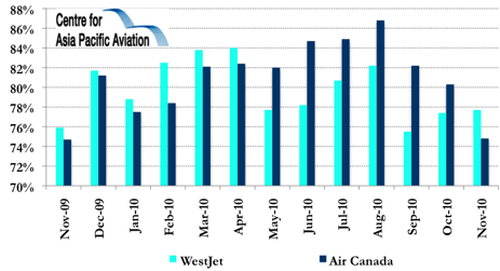 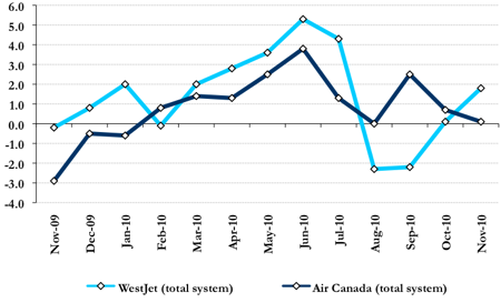 Porter Airlines, meanwhile, reported a considerably lower load factor of 54%, a 4.6 ppt year-on-year improvement. The carrier, however, noted that it an industry-leading break-even load factor of 49% in 2009.

As previously reported, Air Canada and WestJet blew their profits out of the water during the third quarter 2010, reflecting a recovery in the Canadian market, with 70% and 80% increases from 3Q2009. WestJet’s 72% increase in net earnings in the third quarter was well and truly bested by Air Canada which posted an 82% increase in EBITDAR, growing CAD261 million to CAD581 million.

Even as they are celebrating their recovery, however, Canada’s two major airlines are looking ahead at growing yield pressure in the face of rising capacity in the international arena alerting investors to what may be a growing problem in coming years. Meanwhile, the two carriers are also facing competition from Porter in the trans-border and domestic markets where it is using the Q-400 and Billy Bishop Toronto City Airport to poach traffic from Pearson. See related article: Canadian market recovers with high double-digit gains by carriers

Air Canada CEO Calin Rovinescu has also warned that Canadian aviation policies are constraining the growth of the airline and the carrier would save up to CAD1 billion (USD990 million) in airport rent, airport infrastructure, navigation fees and charges if it was located in the US. The CEO also stated that Canadian airlines are losing customers to US airports near the US/Canadian border, as flights are cheaper.