Weather costs keep on mounting for US airlines

In releasing its February traffic statistics yesterday, United Airlines stated its weather-related cancellations last month reduced revenue by about USD40 million, from 1,740 cancelled flights. However, the benefit to PRASM was approximately 1.5 points from storm-related reductions in ASMs and the impact of the Lufthansa strike on trans-Atlantic loads. The company said that storm-related cancellations accounted for 3.5 ppts of the 5.3% year-over-year decline in consolidated ASMs for the month of February, and are expected to reduce consolidated ASMs for 1Q2010 by approximately 1.0 ppt.

American did not report the storm impact separately, nor did Delta and Pinnacle/Colgan. However, US Airways blamed the storms for USD30 million loss of revenue for 2,195 cancelled flights and Continental for USD25 million for 1,178. Of those airlines that have reported February statistics so far, Delta cancelled 3,369 flights, while American cancelled 2,509 and American Eagle 2,779. Pinnacle was forced to cancel 1,320 flights while Colgan slashed 998. SkyWest was forced to cancel 1,092, while sister carrier Atlantic Southeast grounded 1,573 flights.

Helane Becker from Jesup and Lamont suggests a USD100 million hit. But so far, there is no total estimate for the industry and probably won’t be one until the first quarter results are in. However, a glimpse may come from today’s JP Morgan Aviation, Transportation & Defense Conference where most low cost and legacy carriers will be discussing their investor-worthiness. The real question is not just the reduced revenues, but what the irregular operations did for costs.

While the winter storms that hit in February cost AirTran between USD5 and USD6 million, the real story, according to CFO Arne Haak is on the yield side, confirming that first quarter yields for the industry will show "great improvement" over the dismal 2009 first quarter.

“We expect double digit unit revenue in March,” he told the Raymond James 31st Annual Institutional Investor Conference. “We’ve gone from negative in January to positive in February to double digit in March and that is continuing into the second quarter - so that bodes well for a good outlook for this year.”

It should be pointed out, however, that RASM in March 2009 was down 16% followed by a like drop in May and an 18% decline in June 2009. Raymond James, in introducing, AirTran noted that the RASM jumps this year have sent airline stock up. It also pointed out that AirTran had the right combination – the lowest cost producer with good liquidity at about USD530 million.

AirTran, however, reported the cancellation of 1,400 flights cancellations, putting a crimp in its capacity plans for the first quarter which called for a 7-8% increase.

“It was actually up only 6%,” said Haak, noting the loss of 1.5% of capacity owing to the storms. “We’ve had more cancellations in the first eight to ten weeks of this year, than we had in 11 months last year. It took us until November to reach 1,400 cancellations in 2009. “Of course, reducing utilisation pushes up operating costs related to de-icing and all sorts of other operational costs. The good news is that, while our revenue was reduced…unite revenue accelerated. Yields are improving dramatically. Overall unit revenue is up 3.5-4.5%, a whole point higher than expected even as recent as late January. This is clearly a positive.” 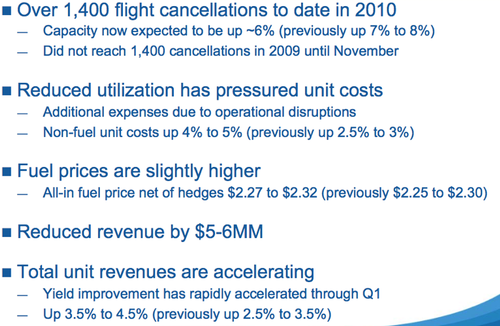