Weak and fragile recovery, but losses set to continue in 2009

Airlines are sustaining their losses on a cushion of new cash and debt, as they continue to bleed red ink as traffic and revenues remain firmly below last year’s levels.

The question now is “will this be enough?”

Industry losses reached USD2 billion in the traditionally strong second quarter (when airlines are usually expected to generate 50% of their profits) to add to the deep first quarter losses. The red ink is expected to continue to flow in the second half of the year, taking full year losses over USD10 billion an close to the amount of extra funding raised opportunistically by the airlines.

But carriers still need to fund their massive fleet expansion plans. EADS CEO, Louis Gallois, voiced concern recently that weak airline balance sheets would mean slow aircraft ordering in 2010 and 2011, but financing deliveries scheduled for the remainder of this year and next is a major concern for the industry.

Passenger and freight improvement, but from low base

Passenger and freight levels are now showing some tentative signs of improvement. Freight is benefiting from the inventory cycle, with inventory restocking driving shipments back up. After stabilising at the end of 1Q2009, passenger traffic is also showing signs of stabilising, but the recovery path it is expected to take is “likely to be volatile and weaker than normal recoveries”, according to IATA. 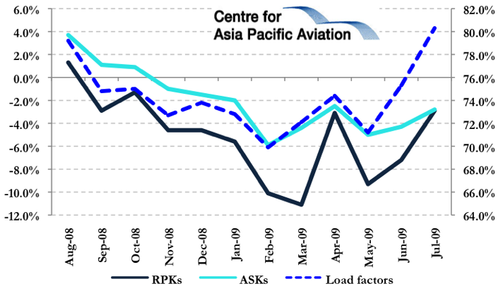 Average passenger load factors hit 80.3% in Jul-2009, the first time this year that load factors have matched levels from the previous year. IATA has cautioned that this could represent something of a high water mark for the year, as airlines move into a seasonally weak period and airlines shift away from their previous capacity cutting stance.

According to IATA, published airline schedules now “suggest some capacity growth ahead”. Overcapacity has already had a disastrous effect on passenger and freight yields. Elimination of the imbalance will be “the key to stopping the decline in fares and stabilising revenues as well as volumes”. 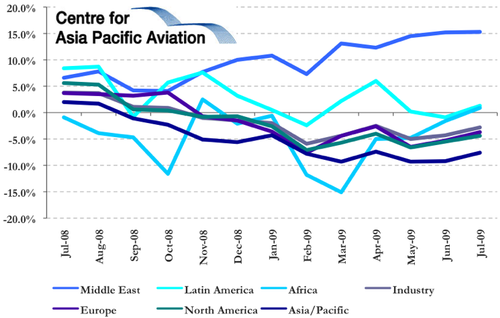 The Middle East remains the best performer, but concerns remain about the impact of strong capacity growth in the regions on earnings.

See related article: Middle East traffic still on the rise, but at what cost?

And yet more aircraft?

Airlines are still taking delivery of new aircraft at a rapid clip, as well as returning others that were stored at the height of the fuel crisis back into service. The worldwide net airline fleet has increased by 487 this year (an increase of approximately 2%). Airlines have taken delivery of 722 new aircraft for the year to date.

But increasingly prevalent delivery deferrals are beginning to show, with IATA’s total 2009 aircraft deliveries expected to be 20-25% less than the 1,500 originally forecast. 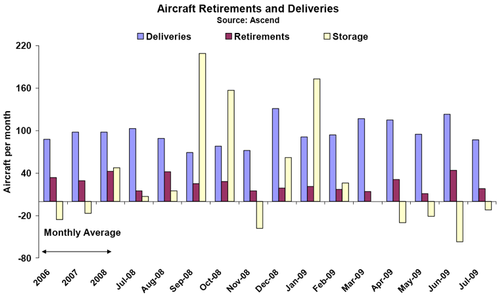 The replacement and expansion of the global fleet is having a significant effect on fuel savings, but the swiftly climbing price of oil is becoming a renewed concern. After starting the year at around USD40 per barrel, crude oil prices are creeping closer to USD80 per barrel, while jet fuel prices have already breached the USD80 per barrel barrier. The negative cash impact of this fuel price hike is “particularly damaging”, given the weakness of passenger/cargo yields.

Until demand returns and yields pick up, the profit outlook for airlines remains marginal, at best. The capacity imbalance and cash drain is set to continue, as airlines are locked into near term aircraft delivery schedules and attempt to drive volumes at expense of yields. The “fragile foundation” for a recovery has been established, but it will remain extremely sensitive to any more shocks, which could send more airlines over the edge in the second half of the year.

IATA had earlier forecast that losses for the full year would be approximately USD9.0 billion, a figure that may well be revised further into the red. Even with improving traffic, the airline industry will remain in “intensive care” for some time.