Meanwhile, the Kuwait-based carrier, which currently operates a fleet of four A320 aircraft, is scheduled to receive one A320 later this month and a further two this year.

Elsewhere in the Middle East, Royal Jordanian Airlines (-2.3%) was also down, while Air Arabia (+1.0%) gained.

In Africa, Comair subsidiary, Kulula, announced FIFA ordered the airline remove its advertising, “Unofficial National Carrier of the You-Know-What”, showing pictures of football stadiums and national flags, following reported infringements to its World Cup trademark. FIFA stated the combination of elements in the ad were “ambush marketing”, as the airline created an unauthorised association with FIFA. Kulula holding company, Comair Limited’s Marketing Director, Heidi Brauer, stated the carrier is “surprised” by the complaint, but the airline has to be “respectful because FIFA has very stringent rules”. Comair was flat at the end of trading. 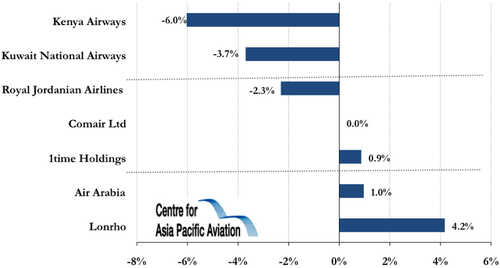