Kuwait National Airways (-1.8%) was down after Wataniya Airways Chairman and Managing Director, Abdulsalam Al-Bahar, stated the airline is looking forward to the privatisation of Kuwait Airways Corporation, stating it is currently difficult to compete with KAC as a private sector airline, as fuel and airport space rentals are currently subsidised for KAC.

In Africa, Comair (+3.6%) was the day’s biggest gainer. The carrier, which is the franchise operator of British Airways in South Africa, announced last week it has partnered with the Mpumalanga Tourism and Parks Agency to expand its domestic route network to include Nelspruit. Effective 04-May-2010, British Airways will operate Johannesburg OR Tambo-Kruger Mpumalanga service. 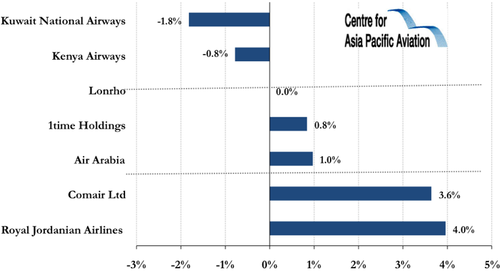