European airline stocks were mixed on Tuesday (27-Jul-2010), despite wider markets reaching a five-week intra-day high during the session. Markets were up on further US home data from the US, strong financial results from UBS and the Basel Committee’s announcement that they will scale back many of their proposed bank capital and liquidity rules.

The carrier stated it achieved an EBIT of EUR75.8 million in the 12 months since its merger with clickair, four times the amount of the previous corresponding period.

Vueling also commented that it was able to reduce its costs per ASK (CASK) excluding fuel by 1% over the past 12 months, mainly due to a cost reduction plan implemented at the start of 2010 and synergies resulting from the merger.

Vueling maintained guidance for an improved net profit for 2010 and expects cash levels to significantly increase for the year. The carrier also aims to reduce CASK excluding fuel to EUR 4.00 cents for the year. However, it expects stronger competition on 3Q2010 and 4Q2010.

Air France expecting to break even this year

Air France-KLM (-0.1%) slipped, despite reporting improved financial results for the three months ended 30-Jun-2010 (1Q2010-11). The group reported a net profit of EUR736 million for the quarter, compared to a loss of EUR426 million in the previous corresponding period. Air France-KLM attributed the performance to a strong rise in unit revenues and a containment of unit costs. Revenue per ASK (RASK) rose 14.8% for the period, while unit costs per equivalent ASK (EASK) rose 9.2%, but by only 1.3% on a constant fuel price and currency basis.

The group stated forward bookings for 2Q2010-11 are solid, but uncertainty surrounding the economic environment and the fuel price has led it to "remain prudent" for 2H2010. Air France-KLM stated: "Nevertheless, in view of the positive indications from the medium-haul transformation and the quicker than expected turnaround of the cargo business, Air France-KLM expects to break-even at an operating level for the year, excluding the impact of the air space closure in Apr-2010."

Elsewhere, Air Berlin (+2.7%) also gained on news released the day prior that it is joining the oneworld alliance. See related reports: 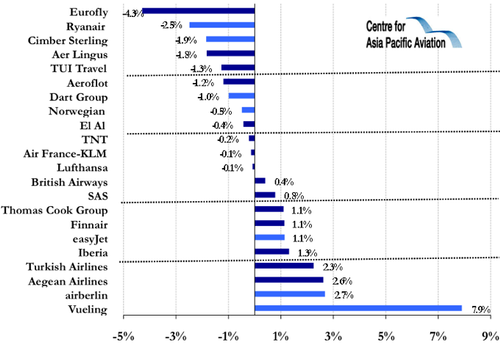