The majority of European carriers’ shares gained on Wednesday (12-May-2010), moving with wider markets on improved financial results from businesses including Allianz and ING Groep and news the Spanish Government plans to cut its budget deficit. UK markets also rose after the appointment of a new Coalition Government between the Conservative and Liberal Democrat parties.

Vueling (+3.3%) gained after the carrier reported an 86.4% year-on-year rise in passenger numbers for Apr-2010, to 909,000. The strong gain was aided by its merger with clickair in Jul-2009. However, load factor was down 2.1 ppts, to 73.3%. The carrier stated the reduction was due to the Holy Week holidays this year falling partly in Mar-2010, while the whole holiday fell in April last year.

Competitor, Iberia (+1.7%) was also up for a second time in three days.

CEO, Willie Walsh, stated during trading that he would resist attempts to undermine the carrier through strikes. It is estimated that the 20-day strike approved by the union could cost the carrier up to GBP150 million. Seven days of strikes in March resulted in losses of approximately GBP45 million.

Mr Walsh also made an appeal to staff to volunteer to keep BA operating during the strikes. The carrier expects to operate the majority of its long-haul operations from London Heathrow during the strikes and does not expect operations at London Gatwick to be affected. British Airways has reportedly already trained more than 1,000 volunteer cabin crew. 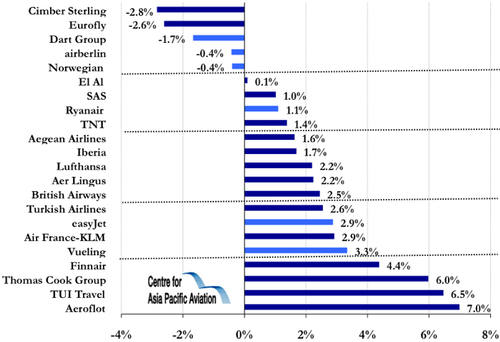