Virgin Blue shares rocketed up almost 15% yesterday in the wake of the carrier's first half financial report, as investors put the carrier's grim outlook to one side for a day.

AirAsia shares added a further 1%, as the carrier signed an agreement with Barclays Capital and BayernLB to finance 15 new A320-200 aircraft due for delivery mainly in 2009. Reports emerged the airline is discussing a package with BNP Paribas for 14 more A320s scheduled for delivery in 2010. Even after the Barclays/BayernLB deal, AirAsia needs to find USD3.6 billion in financing for 104 aircraft scheduled for delivery from 2010 to 2014. Investors appear to buoyed by the latest transaction.

AirAsia is also pressuring the Malaysian Government to develop a low-cost structure for the airline to continue operating from Kuala Lumpur International Airport (KLIA). CEO, Tony Fernandes, told the Malaysian Star newspaper that the airline could handle 30 million passengers at KLIA annually, if costs were reduced. 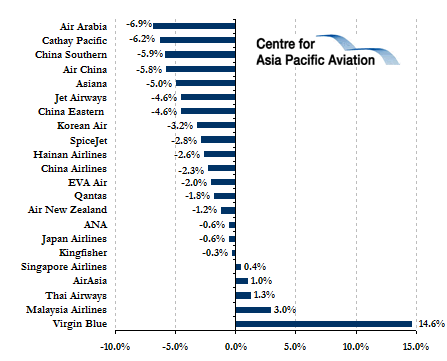