In the space of four weeks, Australian carrier Virgin Blue has twice downgraded its earnings guidance for the current financial year (to 30-Jun-2010) from the AUD80-110 million profit before tax and exceptional items target announced on 04-Feb-2010 to just AUD20-40 million revealed today. Its shares have collapsed 28% this morning in an otherwise buoyant session on the Australian Stock Market after a strong lead from European and US markets overnight.

The airline reported a AUD67.5 million profit before tax and exceptionals in the first half, suggesting the second half will be deeply loss-making, as rivals increase capacity and fares come under pressure, particularly in the domestic market.

Virgin Blue’s new CEO, John Borghetti clearly faces bigger challenges than the market had been anticipating, after his handover from Brett Godfrey. The carrier's stock has almost halved in value in the space of a month.

The carrier stated that since the guidance was given earlier this month it has continued to see “rapid deterioration and increased volatility in the operating environment, particularly in respect of the leisure segment both domestically and internationally”. The airline added this is consistent with the weakening trend seen recently in the broader retail market, as well as an "unexpected and sudden" decline in consumer confidence in the last month.

The airline’s domestic load factors fell last month and Virgin Blue stated the decline in demand has coincided with a period of increased industry capacity and it expects average fares to decrease by over 10%, “in line with the trend seen in the recent BITRE data for discount economy fares”. The airline stated its short haul business is still expected to make a net profit before tax and exceptional items in the order of AUD100 million.

Virgin Blue stated it would “continue to monitor market conditions and, should these prevail, we have flexibility to adjust capacity through lease returns”, adding “we remain focused on defending our core strategic routes”. 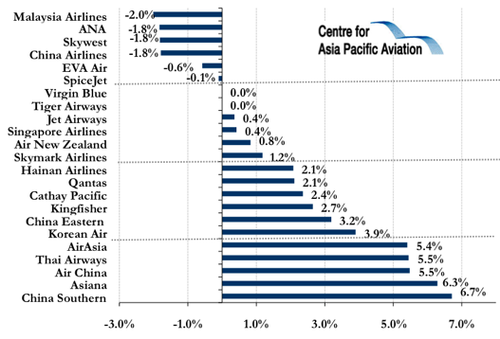