The majority of Asia Pacific airlines' share prices gained yesterday (09-Jul-09), with Virgin Blue, China Airlines and Qantas leading the pack, gaining 5.2%, 4.3% and 3.8%, respectively. Cathay Pacific and Singapore Airlines were also up, by 3.1% and 1.7%, respectively.

V Australia/Virgin Blue and Delta yesterday announced plans to seek regulatory approval to form a JV that will "expand both carriers' reach between the US and Australia and the South Pacific". That Virgin Blue and Qantas shares gained indicates the market thinks they will both will benefit from any JV, as it could stabilise pricing on the Australia-US route.

Shares in the listed Chinese carriers also gained yesterday, with China Southern, Air China and Hainan Airlines up by 2.5%, 2.1% and 0.8%, respectively, while shares in Taiwan’s China Airlines were also up, by 4.3%, as details were released on routes and schedules for regular cross-Strait services. Meanwhile, China Eastern Airlines' Chairman, Liu Shaoyong, stated he expects shares in the carrier to resume trading on 13-Jul-09. The carrier is also expected to finalise a proposal for the China Eastern-Shanghai Airlines merger next week.

Elsewhere, Japan Airlines’ shares slipped 2.2% yesterday, as it reported a 13.4% domestic passenger reduction in May-2009 to 3.0 million and a 19.8% international passenger reduction to just shy of 785,000 passengers. Further traffic weakness is likely, with Japan Travel Bureau (JTB) stating it expects the number of Japan residents planning overseas trips in the peak Summer vacation season (between 15-Jul-09 and 31-Aug-09) to be down by approximately 5.8% year-on-year to 2.1 million, the third consecutive years of declines. 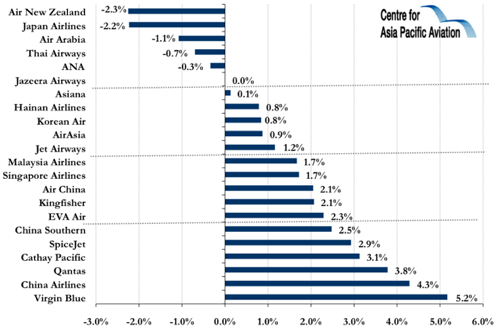