It follows reports that Japan Airlines is considering eliminating over 4,000 more jobs than anticipated by fiscal 2012, to a total of 20,000, or nearly 40% of the existing JAL group workforce. JAL has also decided not to recruit any new graduates, including pilots and cabin crew, for fiscal 2011, for the first time in its history.

JAL’s cutbacks are expected to play into the hands of rivals, including Skymark Airlines, which are anxious to expand. See related report: Early retiring Japan Airlines pilots could reshape Japan’s airline industry

Elsewhere, Virgin Blue continued to rise after a healthy February traffic report, while AirAsia rose 0.7%. The Malaysian LCC is expected to learn in the next couple of days whether its long-haul arm, AirAsia X has gained coveted rights to launch Kuala Lumpur-Sydney service. 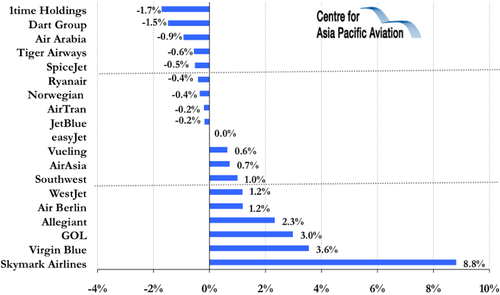