A combination of Virgin Blue and Air New Zealand has obvious symmetry. There has consequently been constant talk that some form of cooperation was about to occur. Virgin Blue is a genuine LCC which has evolved to full service airline; Air new Zealand is a full service flag carrier become low cost. So Virgin Blue’s terse announcement today that it has been conducting “discussions with Air New Zealand over several months regarding commercial co-operation on Trans Tasman markets” – to satisfy stock exchange requirements, following a spate of recent rumours – is not surprising. It will however be enough to get their mutual major competitor, Qantas/Jetstar, greatly concerned.

Air New Zealand certainly needs to do something on trans-Tasman routes. In its largest market, Air New Zealand is caught in limbo between very aggressive Jetstar pricing and the much higher prices that Qantas is able to levy as part of its corporate dominance and wider network. Although Jetstar has a relatively small market share on Tasman routes, it is able to undermine Air New Zealand’s pricing very effectively, driving its yields down in response.

This is an excellent example of how the Qantas double-brand is able to attack a market, although Air New Zealand is unlikely to appreciate its finer theoretical points.

Jetstar does have a cost advantage over the New Zealand flag carrier, but the current price differentials far outweigh the LCC’s lower cost position. Jetstar is arguably able to drive this price differential because of the network benefits the routes generate elsewhere, including its skeletal, but expanding, domestic New Zealand services.

Here Air New Zealand is uncomfortably positioned, about halfway between Qantas’ and Jetstar’s prices. Meanwhile, quite clearly Qantas is mopping up most of the higher yielding market. These fares do not tell the whole story, as the balance of higher priced, less flexible fares is not fully reflected.

But the Tasman is a highly price sensitive market and, as these fares reflect consistent differentials for similar trips going out 30 days and 60 days respectively – with plenty of seats available at these prices – this comparison does give a good view of the cold reality of the situation.

New Zealand-originating prices are however considerably cheaper, mainly because the respective dollars have diverged greatly in the past year, with the AUD worth almost NZD1.30 at current rates. Nonetheless there is no relative logic here between Virgin Blue

Air New Zealand has frequently been using its main advantage – a comprehensive and seamless domestic network – to fight back. It has done this for example by offering “cash-backs” or free domestic add-ons to the trans-Tasman fare. These tactics have been extremely effective in trashing the Air New Zealand yields; on “Tasman and Pacific Island” routes (a short haul grouping which disguises the precise downside on the Tasman – although the latter drastically outweighs Pacific Island capacity), Air New Zealand’s yields were down a whopping 14.0% for the six months to 31-Dec-2009, against a slumping base in 2008.

This was despite reducing capacity by 10.5% (“demand” was down 2.9%, for a quite positive net increase in load factor of 6.3%) over the period. So Air New Zealand is not only losing market share, it is also losing a lot or money on the route. 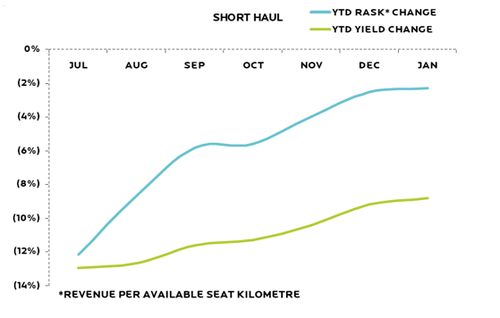 Virgin Blue meanwhile has been pricing less aggressively, while simultaneously attacking the New Zealand market which underpins its would-be partner. Like Jetstar, it has nothing like the capacity that Air New Zealand has on the man routes. The only New Zealand airport at which they go head to head is Dunedin (which will not be enthusiastic about any form of rationalisation between the two, if it involves capacity reductions.

The competition implications. Complex, but mostly not too difficult

Previous failed attempts by Qantas and Air New Zealand to merge or coordinate their operations will have provided plenty of pointers for Virgin Blue, especially as its CEO-in-waiting, John Borghetti, was one of the key authors of those moves while at Qantas.

In the final analysis, the deal was only found wanting by the NZ Commerce Commission, whose perhaps-nationalistically tinged rejection was founded on its belief that there would be too substantial a negative impact on the New Zealand domestic market. On appeal in Australia, there was found to be no impediment under Australian law. That is important, as a combined Qantas/Air New Zealand would have had a larger dominance than the 56% or so that Virgin Blue and Air New Zealand would constitute overall. 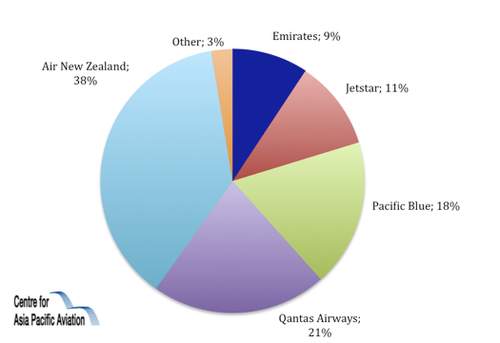 With Qantas/Jetstar and other operators occupying 44% of the total capacity, that overall balance should not cause the competition authorities any great concern.

The picture does vary however for some of the specific bilateral city pairs. The following tables are only indicative, as they do not cover actual city pairs, but they do give an idea of the relativities.

As mentioned above, Dunedin is an obvious case in point, where the two potential partners account for all of the trans-Tasman seats.

A similar picture applies for Cairns. Neither of these is central to any agreement and could either be excised from it, or made subject to a commitment to continue operations and competitive pricing. Auckland is well balanced and highly competitive overall.

Most other airports have a reasonably well balanced competitive situation. This is possibly partly a result of the two carriers’ being well aware over past months of the potential next steps to be taken, although Virgin Blue management has long maintained a position that the carrier did not want to become overly involved in a market where it believed its cost base would not support the sort of prices applicable on most city pairs.

Indeed, one airport could in fact be a beneficiary of enhanced cooperation between its only Tasman incumbent and the Australian carrier. Virgin Blue could potentially add some beef to Air New Zealand’s operation – and the same may be true for other relatively marginal Australian and New Zealand city pairs.

Other, major, Australian airports are generally well balanced in terms of their airline operations. Sydney, for most city pairs at least, is most competitive.

Melbourne is balanced too.

But Brisbane, Virgin Blue's base, where it is much stronger, will be looked at more closely.

But the smaller Gold Coast fits a competitive profile quite happily with the two carriers cooperating.

The potential for wider cooperation

Cooperating on – and even rationalising (ie reducing total capacity) -  the Tasman should not therefore be a major stumbling block from the regulatory perspective. That then begs the question: how far can this relationship be expanded? Achieving some traction on the Tasman is a good start, but there are some other very tempting goals as well. Developing a joint venture in each others’ domestic markets would be a great scenario for both, with some very real potential upside in both market share and yield profile.

Improved yields and corporate business for both?

Meanwhile, a Tasman agreement would give Air New Zealand some much needed respite from the aggressive competition now occurring across the ocean. At the same time it will give the dynamic duo of Qantas/Jetstar a little more to chew on. Perhaps more important than making conditions a bit (but probably not massively) more gentle, there will be opportunities for improving on the two carriers’ respective yields – not so much from the reduced competition, but by virtue of their joint ability to attract higher yielding corporate traffic.

This quest for yield and the corporate market has been Virgin Blue’s mantra for the past three years at least, but the carrier has found it heavy going, up against Qantas, with its two-thirds Australian domestic share and some powerful vertical marketing features. Going regional with RJs, then international with B777s and, subsequently, attempting a joint venture with Delta, are all part of that strategy.

This is however sensitive territory for airlines. Sharing vital passenger data is something that only intimate and long term partners feel comfortable about. Assuming that this is a first step in what might surely be a wider relationship – at least there is lots of potential for broadening it – there will be other rapids to navigate than merely the competition authorities.

One is that Virgin Blue appeared to be steaming rapidly towards a close role with the global SkyTeam Alliance; Air New Zealand is however firmly anchored in the Star Alliance, not so much because the carrier is one of the biggest beneficiaries of that grouping, but because leaving it is so financially painful.

A not so healthy relationship with Singapore Airlines has not delivered a lot of Star Alliance benefits for Air New Zealand in Asia, although United gives it decent US access to behind its Los Angeles gateway, despite its best hub being in San Francisco. And Lufthansa is an active codeshare partner with Qantas over Australia. Star Alliance, alone among the alliances, has stiff financial penalties for leaving, as well as limits on the forms of cooperation that are permissible while still inside.

And good old nationalism lurks around every corner

Another challenge is that, after a flirtation with independence, Air New Zealand is still firmly a government-owned airline. That is not insuperable, but it does make any major strategic change a whole lot more complicated – and political, with any number of opportunists queuing up to recite nationalist slogans at the slightest hint that the flag carrier might lose its national flavour.

"Good, even very good, for both carriers"

For now, that discussion is all for another day, once a Tasman deal is sorted out. Qantas will undoubtedly be ready to fire some commercial and regulatory shots across its bow, but the prospects of it becoming reality would seem high. And that will be good, even very good, for both carriers.

Only a wider relationship would be a real game changer. That may take another few months. But look to Mr Borghetti to be extremely enthusiastic in attacking every inch of his former employer’s territory. And, as he looks back over his shoulder, Brett Godfrey will not be at all troubled to see how his nearly ten year old offspring is maturing.

(PS It’s a jungle out there)

Any application to the respective competition authorities can be sure to receive some attention from another beast of the jungle: Tiger Airways. The airline is busily expanding domestically in Australia, and in the process, driving yields down to the lowest in the country’s history.

Tiger’s management has expressed a wish to fly the Tasman, but is being held back by regulatory restrictions, the carrier being majority owned by Singapore interests, including its largest shareholder, Singapore Airlines. Tiger would love to use up some back of the clock hours on the Tasman, not to mention intruding into the domestic market. Any perceived reduction in competition would be used as further justification for admitting it to the route. But that too is a story for another day.