Virgin America will continue its strategy of targeting fortress hubs with service to Philadelphia commencing in Apr-2012 from Los Angeles and San Francisco. Virgin America will take approximately one-quarter market share on both routes at the main expense of Philadelphia's hub carrier, US Airways. Philadelphia is a key step in the development of Virgin America's network as it will give the carrier service to all five of the largest metropolitan areas in the US and eight of the top 10, with only Atlanta and Houston still missing from its network but likely to be added before the end of 2012.

Virgin America's first flights to Philadelphia, its 17th city, will arrive on 05-Apr-2012 with double daily service from Los Angeles on the carrier's 137-seat A320s. A third daily frequency will be added on 01-May-2012. Services from Virgin America's San Francisco hub commence 10-Apr-2012 with one daily frequency, increasing to double daily on 01-May-2012.

The introduction of non-stop flights will benefit some of the 50% of passengers who travel between Philadelphia and Los Angeles via connecting flights, Virgin America estimates. The carrier also estimates that 45% of passengers travelling between Philadelphia and San Francisco are connecting passengers. From San Francisco, Virgin America also serves on the west coast Los Angeles, Palm Springs, San Diego and Seattle. 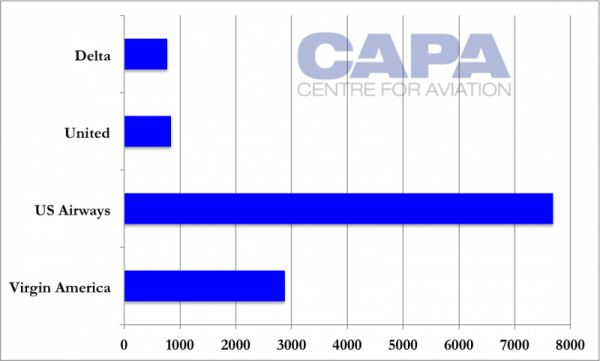 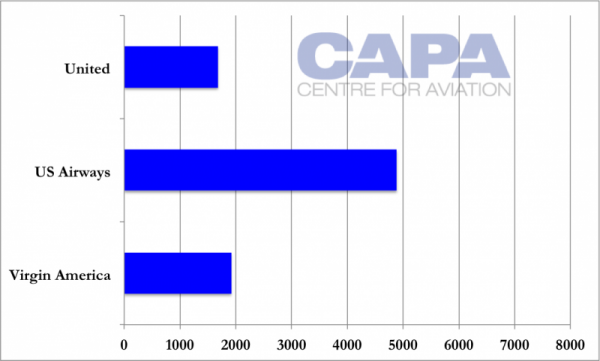 US Airways' monopoly, both on the routes and at Philadelphia International Airport, has created a hub-captive situation for Philadelphia area residents Virgin America will look to exploit. Many in the area already consider Newark, with more options, an alternative. Virgin America's entrance, likely to be followed by fare wares by the incumbent carriers, can woo passengers back to Philadelphia. The carrier noted the greater Philadelphia region is home to a pharmaceutical industry and biotechnology research and development.

Virgin America's entrance into such a strong hub follows its route to Dallas Fort Worth, the mega hub of American Airlines. Despite American often undercutting Virgin America on price, Virgin America has remained steadfast it will stay in the market, a prospect enhanced by American Airlines cutting capacity as part of its bankruptcy proceeding. Philadelphia does not have the same dynamics but did see Southwest pull out of some markets last year. US Airways immediately took advantage of the drop in supply and alternative carriers by significantly increasing prices.

Virgin America says fares usually drop by one-third in markets that it enters, and Philadelphia's high fares are evident in CAPA and ITA's fare tracker, which shows consistently higher fares to Los Angeles from Philadelphia than New York JFK despite the two east coast airports being relatively close to each other. Virgin America already serves JFK from both Los Angeles and San Francisco. 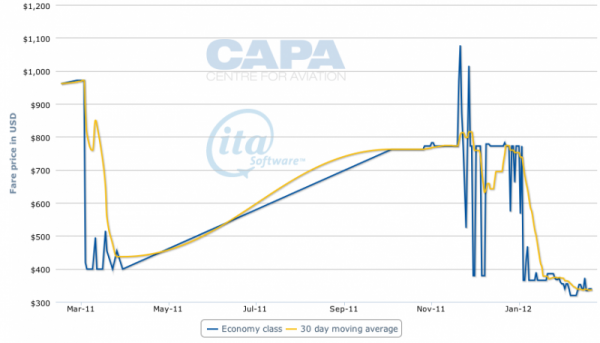 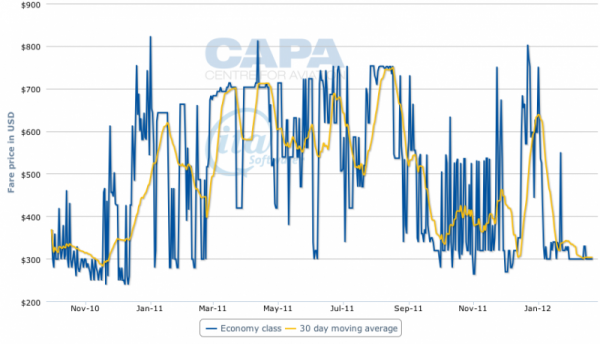 Virgin America may also launch Atlanta, Houston and Newark in 2012

With the addition of Philadelphia, Virgin America will also serve eight of the largest 10 metropolitan areas in the US. The only cities on this list still lacking Virgin America service are Houston and Atlanta, which are the largest hubs for the two largest US carriers – United and Delta.

Virgin America is receiving enough additional aircraft in 2012 to add several destinations. The carrier’s all-A320 fleet this year is slated to grow from 46 to 58 aircraft. As CAPA reported late last month, Virgin America is eyeing several new destinations including Newark and Washington National, two slot-controlled airports it has not yet succeeded in accessing.

Philadelphia International is the main airport for the Philadelphia area but historically has been dominated by US Airways, which now accounts for 74% of total capacity at airport, according to Innovata data. Fares came down significantly after Southwest Airlines entered Philadelphia in 2004 and when Southwest was able to expand its Philadelphia operation after it gained access to additional gates in 2007. But Southwest reduced capacity at Philadelphia last year and is implementing further cuts in Philadelphia during 1Q2012, helping free up space for Virgin America’s entrance in April.

Southwest is still by far the second largest airline at Philadelphia, accounting for just under 10% of current total capacity (seats) at the airport. But Southwest only operates one-stop flights to the Los Angeles and San Francisco areas from Philadelphia, leaving a void in the market for Virgin America.

Baltimore-Washington International Airport (BWI) and Newark are also in the Philadelphia encatchment area, with BWI’s low fares particularly attracting residents of in the southern suburbs and Newark’s bigger offering attracting residents in the northern suburbs. But Virgin America currently doesn’t serve BWI and has thus far been unable to secure slots at Newark. The carrier now only serves one New York area airport, JFK, which is not convenient to Philadelphia, and one airport in the Baltimore-Washington area, Dulles, which is also not convenient to Philadelphia.

Philadelphia will also be an attractive new destination to some of Virgin America’s Asian partners, including Virgin Australia and Cathay Pacific Airways. While Philadelphia is one of the largest cities in the US, it is only served by three international carriers, none of which are from Asia. As a result, flights from Philadelphia to Asia rely on domestic connections to Los Angeles and San Francisco.

Star Alliance carriers now dominate this market because Star members United and US Airways now account for 100% of capacity in the Philadelphia to Los Angeles and San Francisco markets. Virgin America, which is interested in forging interline and codeshare with all types of foreign carriers, will offer Asian carriers outside Star a new and better option for offering connections to the fourth largest US metropolitan area.