Virgin America announced plans to more than triple its fleet by 2019, unveiling a USD5 billion (list price) firm order for 60 A320 aircraft. The aircraft will be delivered between 2013 and 2016 and includes 30 A320neo (new engine option) aircraft. This confirmed order could make Virgin America possibly the fastest growing carrier in the US market.

Virgin America President and CEO David Cush, announcing the order, said: "At just three years old and at a time when many carriers are contracting, we're pleased to be growing and bringing our award-winning service to new markets. This is a big vote of confidence about our growth.”

Virgin America has 34 aircraft in its fleet with another 12 to be delivered this year, meaning its fleet is projected to grow by two-thirds by the end of 2011 and triple 2016. The airline "is seeking to expand its network throughout the US and expects to have a fleet of between 80 and 110 planes by 2016", according to CEO and President, David Cush, as quoted in an interview with the New York Times. With this order and growth from other sources, Virgin America's fleet will increase to 111 aircraft by 2019. 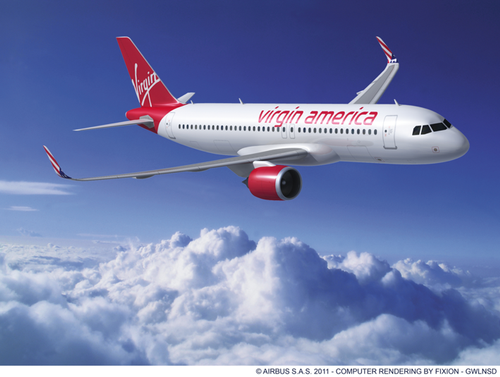 With the Airbus agreement, Virgin America has become the first firm customer for the new model of Airbus' top-selling A320 aircraft and Airbus’ 10,000th order in the manufacturer’s 40-year history. The order was signed in late Dec-2010 and announced in mid Jan-2011.

It formalises and expands an initial commitment made at the Farnborough International Airshow in Jul-2010. Virgin America at the time stated it would purchase 40 new aircraft, with 20 options, with the firm order figure growing due to the availability of the A320neo.

At the time of the Jul-2010 announcement, Virgin America stated the order constituted the delivery of 9.3 firm orders p/a on average up until 2016, equating to fleet growth of 165%, with options for the 20 additional aircraft to be delivered in 2017-18. Based on the current order and timeframe, growth will occur at annual rate of around 8.6 aircraft p/a with overall fleet growth of 226% over the timeframe.

Virgin America and Airbus announcing the A320 order 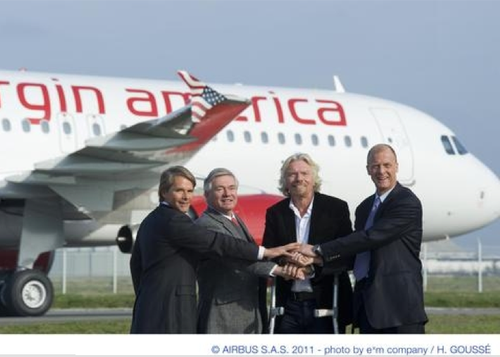 Since its 2007 launch, Virgin America has operated a new A320-family fleet. Seating configuration on the new aircraft will remain the same as the carrier's current A320s, which offer an international-grade first-class cabin and a main cabin and Main Cabin Select services. As with all of Virgin America's fleet, the new aircraft will undergo modifications to offer the airline's mood-lit interior and touch-screen entertainment. Virgin America has the lowest density A320 seating in the North America market and the highest percentage of premium seating

The A320neo to yield annual savings of USD1.1m per aircraft

The A320neo was launched in late 2010 and is set to enter service in 2016. It incorporates more efficient engines and wing-tip "sharklets" to deliver significant fuel savings of up to 15%, or up to 3600 tonnes of CO2 annually per aircraft. Mr Cush estimated that at oil at USD80 a barrel, the annual fuel savings per aircraft with the new A320neo amounted to USD1.1 million. Oil is currently more than USD90 a barrel.

The A320neo also provides a double-digit reduction in NOx emissions and reduced engine noise. The aircraft comes with either a Pratt & Whitney geared turbofan or a CFM International LEAP-X engine although Virgin America has not yet announced its engine choice on the order. Mr Cush, in an interview with the Wall Street Journal, added: "We wanted to stay the greenest airline in the US.”

The A320neo will have 95% airframe commonality with the A320 family whilst offering up to 950 km more range or two tonnes more payload. According to Mr Cush, in an interview with Bloomberg, the upgraded aircraft will allow Virgin America to commence operating A320s that can carry 27 more passengers than the current A319s from Boston to San Francisco. Virgin is currently unable to fly full A320 loads on the six-and-a-half hour trip in winter, when harsher weather demands more fuel against strong headwinds. The new aircraft could also enable the carrier to add service to Hawaii.

Prospects looking up for Virgin America

While continuing to its expansion and simultaneously gaining rave reviews from travel bloggers, the carrier’s financial performance is also improving. Virgin America stated it has seen “seen significant increases in bookings and average fares in the 4Q2010, in line with the overall positive trends for the industry”.

Virgin America earned its first quarterly profit in 3Q2010 of USD7.5 million, a big swing from the USD5.9 million loss in 3Q2009. At the same time, it reported a record operating profit of USD21 million, a 314% improvement from 3Q2009 that resulted in a 10.4% operating margin.

Revenues reached USD202 million in the quarter, up 28%, while unit revenues at the privately held airline experienced a 17% increase to USD 10.37 cents, besting industry unit revenue growth which came in at 10% in the quarter. Yield and PRAMS both jumped by double digits at the carrier, the newest in the US market. 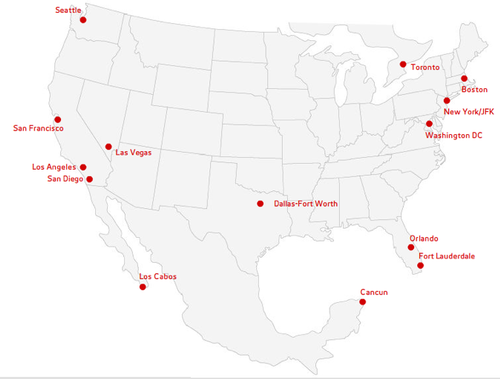 Virgin America President and CEO David Cush has commented that the A320 order is a “big vote of confidence” in the carrier’s growth plans, which have, until now, been marred by the global financial crisis and ownership concerns. With the economic and demand environment improvement, the carrier has now clearly set its sights on rapid growth, as it seeks to expand its market position and network in the North America, and increasingly also South American market.