The financing of aircraft sales by Export Credit Agencies is hardly unusual but there are usually other means to finance airports, for sale, lease or concession.

Not always though, and the Vietnamese government has found it difficult to attract investors to the new Long Thành airport which is intended to alleviate traffic congestion at Ho Chi Minh City Tan Son Nhat Airport.

Enter the Swedish Export Credit Corporation, to a project which could be beneficial for Swedish companies.

It isn’t unusual for Export Credit Agencies to finance aircraft sales. Indeed 50% or more of Boeing and Airbus sales can be covered by the guarantees offered by these national agencies in any one year, which can be offered to airlines outside of their own national boundaries.

The loan guarantees can cut the political and commercial risks for banks and lower the interest rate for the airline doing the deal. ECAs can be government departs or sections of them, or private companies, or somewhere in-between, as a non-governmental organisation (NGO).

It’s less common, though not unknown, for ECAs to help finance airport construction. Less common because as airport infrastructure typically has a longer time-span other methods of financing it, for example, Build-Operate-Transfer (BOT) deals and the variations on them, and public-private partnerships have come to predominate.

Furthermore, airport infrastructure is more attractive to pension and other funds, which seek longevity in their investments.

Sometimes though, such funding is not forthcoming. Several countries in Southeast Asia have been actively seeking foreign investment for existing and new airport projects in recent years, from whatever source they could locate, and especially so when the financing requirement is a large one, for a new facility, and domestic sourcing may not be forthcoming.

One of them is Vietnam, where a socio-economic development plan 2021 – 2025 demands USD150 – 200 billion to finance infrastructure development projects, including airports, seaports, railways and expressways.

Among them is the Long Thành International Airport project in Dong Nai, which was initiated in 2013 to alleviate traffic congestion at Ho Chi Minh City Tan Son Nhat Airport. At that time, the existing airport was expected to exceed its capacity of 25 million passengers and 1.2 million tonnes of cargo per annum by 2020 and the anticipated cost of the new airport, was USD7.8 billion.

The Tan Son Airport has passed its capacity level already, growing passenger numbers in double-digit figures in each year from 2013, up to +22% in 2016 and up to 38.5 million in total, in 2018. Cargo volume increased equally strongly. 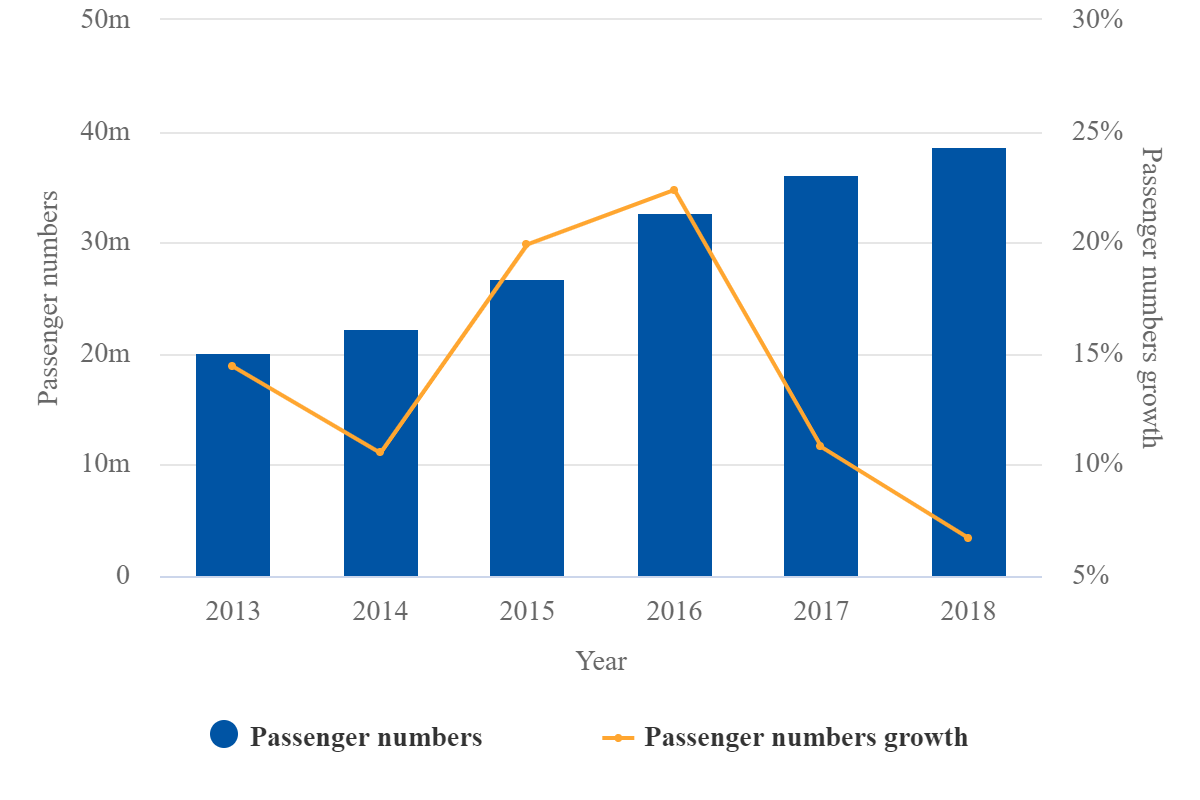 But the project has been dogged by problems similar to those experienced in other Asian countries, especially India, including the acquisition of land from farmers. In total, approximately 5000 hectares of land will be required for the airport's construction, 1810 for the first phase alone, and ultimately affecting 15,000 people, 70% of whom are engaged in farming.

A bigger issue still is funding, for a project that has spiralled in more ways than one. It is now envisaged that it will eventually handle 25 million ppa initially, in its first phase, rising to 100 million ppa when finally completed, with associated cargo tonnage figures put at 1.2 million and 5.0 million per annum respectively.

Costs for the new airport have risen dramatically

Costs have risen proportionally. The final bill is expected to be USD16.3 billion, one of the most expensive airports on earth, including land clearances and the supporting surface infrastructure. And that is before a spade has been turned on the project.

A major issue impacting the project is the withdrawal of France’s Groupe ADP from a proposed agreement to take a 20% stake in Airports Corporation of Vietnam (ACV). Groupe ADP was expected to take a leading role in the design, construction and financing of Vietnamese airports generally. However, it did assist ACV with a feasibility study on the Long Thành airport.

Airports Corporation of Vietnam to find up to USD1.5bn

In Feb-2019, ACV chairman Lai Xuan Thành said the group is prepared to invest up to USD1.5 billion in the first phase of Long Thành  International Airport's development, up from USD1 billion just a month earlier. ACV said its initial contribution will fund major airport infrastructure including the terminal, runways, car parks and cargo storage facilities.

But that still leaves a considerable gap, even for the first phase, now costing USD5.4 billion. More recently, in Aug-2019, Vietnam's National Assembly chairwoman Nguyen Thi Kim Ngan said private businesses should be encouraged to invest in airport projects across the country, especially in Long Thành. The original intention was that the airport’s estimated cost would be more than 50% financed through Official Development Assistance loans and public funds.

Then, in a surprise announcement in late Nov-2019 the Swedish Export Credit Corporation proposed a loan of more than USD1 billion to Vietnam's Government for the development of the airport and air traffic control facilities. The Corporation (in Swedish: Aktiebolaget Svensk Exportkredit) is a state-owned one that serves as an export credit agency. It provides medium- and long-term export credits and works with the Ministry of Finance.

To qualify for the loan, the Vietnamese Government is required to spend 30% of the total investment capital on Swedish technology and equipment. The interest rate is set at 4.2% per annum, including a 1.25% insurance fee. The offer came after a plea by the Vietnamese Ambassador to Sweden for Swedish financial institutions to contribute to the success of the project, following an earlier exchange between the two countries’ prime ministers in May-2019.

So what is in it for the respective parties? For Vietnam, apart from getting its hands on USD1 billion it didn’t have before, this agreement might prompt other Swedish institutions and funds to invest, together with other wealthy Nordic countries. The expression of confidence it generates can act as a stimulant to the private sector.

For Sweden, it ensures that its private industrial sector has an opportunity to take part in a project that could generate further work in Vietnam and the wider Southeast Asia region.

With investors increasingly wary of putting money into any project where there is an environmental impact that can get schoolchildren out on strike it is a fair bet that much of that 30% of investment capital will be going to Swedish firms that specialise in environmental technology. The country is the fifth greenest in the world according to the Environmental Performance Index.

It is entirely possible that Swedavia, which has been in the vanguard of environmental measures at airports, particularly Stockholm Arlanda, could become involved.

Breaking news, 30-Dec-2019: Vietnam's National Assembly issued a resolution requiring the investor of the proposed Long Thanh International Airport to use its own funds instead of relying on the government. National Assembly Economic Committee chairman Vu Hong Thanh said the appropriate investor for the airport project must be chosen to "assure efficiency and socio-economic development" of the airport, adding that Airports Corporation of Vietnam's plan to borrow USD2.63 billion of the USD4.2 billion needed for the project would likely be guaranteed by the Government, thus adding to the public debt.