Australian Infrastructure Fund was down 6.8%, after a mixed performance through last week. The diversified transport infrastructure fund has holdings in airports across Australia (accounting for about 75% of its portfolio) as well as internationally through partial ownership of Hochtief AirPort Capital. Traffic at Australian airports has been holding up comparatively well, although Qantas continues to pour cold water on the outlook.

Vienna Airport also dropped 6.8% on Friday, after reporting poor traffic figures during the week, coupled with continued nervousness regarding the takeover of the main carrier at the airport, Austrian Airlines, by Lufthansa. The airport reported traffic dropped 12.8% year-on-year in May-2009, worse than the 9.5% drop in April. Meanwhile, the European Commission announced it would extend its review the Austrian Airlines takeover to 01-Jul-2009, after Lufthansa offered additional concessions.

Mexican airports group, OMA, continued its strong performance, up 5.8%, on better than expected traffic results and an improving Mexican economic outlook. ASUR, which had been up strongly with OMA earlier in the week, did not match the increase, up 0.4% on Friday. 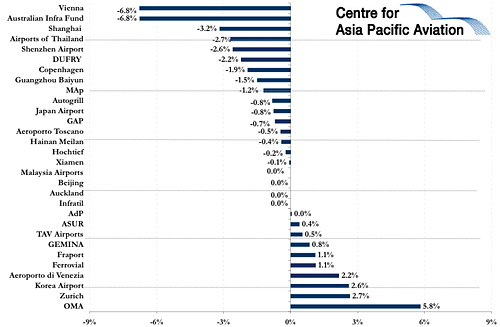