Vienna Airport was a standout in share trading yesterday, gaining 3.5%, as its competitors, Copenhagen and Zurich airports, fell back 3.8% and 2.3%, respectively.

Vienna Airport’s share gain came on the back of comments by Austrian Airlines that although there are "possibly going to be some cuts”, its route network will not change much, following its takeover by Lufthansa. Austrian continues to assess its route network and further details are expected to be announced in the next few weeks.

Chinese airport traffic up on last year's weak base

In the Asia Pacific region, airport shares remained mixed, with Hainan Meilan International Airport leading the increase with a 2.0% gain in its share price in trading yesterday. Guangzhou Airport gained 0.6%. Earlier in the week, CAAC Central and Southern Regional Administration reported traffic highlights for its member airports, including Guangzhou, Shenzhen and Hainan airports, in Aug-2009:

Meanwhile, shares in Grupo Aeroportuario del Sureste, operator of Mexico’s Cancun Airport, fell 1.7% in trading yesterday. Separately, the hijacking of an Aeromexico flight en-route from Cancun to Mexico City has been peacefully resolved. 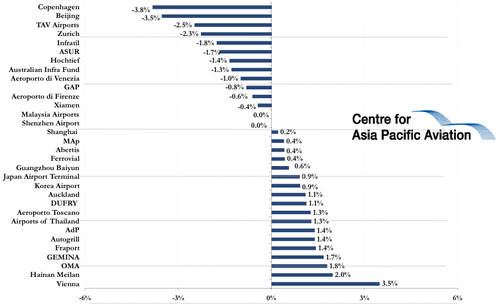