Using new-generation technology as a driver of airline business strategy

Over a short period of time, technology has evolved from being an enabler of airline business strategy, into a valuable driver, as new-generation technology emerges. In addition, airline CTOs are not only helping in the implementation of selected business strategies, but also in their development. That is, they are meeting the needs not only of targeted customers, but also of the business itself.

Let us consider the case of an airline’s business strategy to bring about a significant change in the way an airline merchandises its products and services.

The first objective is, as shown in the adjacent figure, to increase an airline’s profit margin – partly by decreasing its distribution costs and partly by increasing its ancillary revenues. Typically, when passengers visit the website of an online travel agency (OTA), they see schedules and fares of many different airlines displayed via the systems also used by GDSs. When a passenger selects a particular flight, the agency makes a booking on the selected flight, using a GDS.

The airline then pays a commission to the OTA and the GDS. The GDS also pays a part of its commission (received from the airline) to the OTA. If the airline was to use technology to enable the agency to connect directly to the airline’s reservation system (bypassing the GDS), there would be a reduction in the distribution costs. In addition, if the airline was to merchandise its products and services directly to the passenger, it could increase its ancillary revenue through the development of a broadened portfolio of products and services, enabling up-selling and cross-selling. Therefore, as the first bullet in the “Distribution Strategy” bubble shows, the desire to change distribution strategy is about money, through lower costs or higher revenues.

The airline’s second objective is to gain back the control of the customer, something that airlines have been steadily losing over the years. The increase in control can be achieved by engaging directly with passengers to determine their needs and to keep track of their buying behaviour. Moreover, it is through interactive engagement and knowledge of passenger profiles that an airline can begin to merchandise personalised products and services, encompassing a process of bundling, unbundling and re-bundling.

This objective would also move an airline from offering a commodity product to one offering distinctive products. This business strategy has potential to bring back some pricing power and build brand equity, not to mention the need to gain back some control (shown by the second bullet in the figure). While it is true that no one can “own” a customer in today’s environment, given that customers are now empowered by technology, airlines can still leverage the same technology to gain access to their needs and wants, deliver the services desired, and charge according to their willingness and ability to pay. 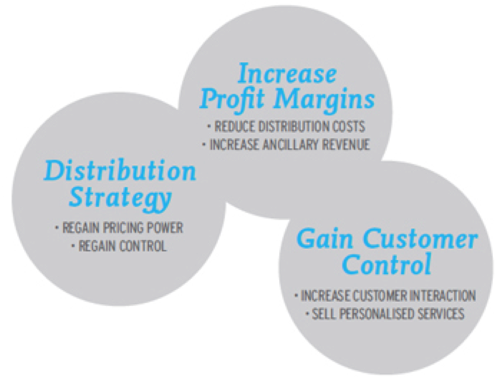 BUT THAT IS JUST THE BEGINNING. To pursue such a game-changing strategy, metrics and data are first needed to develop a strong and defensible business case. OTAs flourish for many of the same reasons the airline wants them removed from the supply chain: they display an array of airlines’ schedules and fares. How many potential passengers would not even come to an airline’s website and simply go through the website of an online travel agency? What incentives would be needed to encourage a passenger to use the website of an airline? What assurance can an airline provide that the passenger is getting the lowest fare?

Most airlines now have partners; how would such a distribution strategy work within an alliance? The airline may, for example, be able to provide a rationale for its higher fares – such as that the flight is nonstop, the seat is better (lie-flat, electric power for the laptop, Wi-Fi availability and so on) and there are back-up flights in case of a cancellation. These qualitative – and often highly valuable – features are usually hidden when the product is commoditised.

Then, does the airline have sufficient information to build a passenger profile to offer personalised products? After all, it does not have the same volumes of internet traffic that the OTAs achieve. How much additional ancillary revenue can be generated through the sale of personalised products? Would the inventory be displayed on meta-search sites such as Kayak.com and Farecompare.com? How would products be presented on sites that provide information on price-service options, such as Hipmunk.com, and flight experience, such as InsideTrip.com?

Meanwhile, other technology-driven forces are emerging, replete with social and commercial implications. They will, in one form or another, impact on the airline distribution process and the airline’s wider business strategy. How can an airline leverage its direction, driven by technology, to capitalise on the proliferation of social media such as Facebook and Twitter?

The social networks can either be considered as a challenge or an opportunity. Take, for example, Facebook’s 500 million-plus users. Suppose each member was invited to indicate his or her travel plans for the next six months. Technology could easily be used to segment this data in numerous ways, such as by day and market. Facebook could then use this information to obtain competitive bids from different airlines for the services needed by its users, once again forcing an airline back into a reactive mode.

On the other hand, the airline could work proactively with Facebook to identify and provide value propositions to its members, thereby coupling social network and data mining technologies. The issue is not simply to ignore such communities, but rather seek ways to interact with them to turn the challenge into an opportunity in extracting intelligence from information.

In short, the successful implementation of a game-changing distribution strategy requires not only the use of new-generation technology, but also the direct involvement of the technology group right from the beginning. The technology group must identify the new relevant technology, its linkage with existing technical systems and the development of metrics as well as the data to evaluate the viability and sustainability of such a business strategy.

Nawal Taneja is an airline business strategist with more than 40 years of wide-ranging experience in the aviation industry, academia and public policy. Encouraged by industry executives, he has written six books for practitioners in the global airline industry, including FASTEN YOUR SEAT BELT: The Passenger is Flying the Airplane; Flying Ahead of the Airplane and Looking Beyond the Runway: Airlines Innovating with Best Practices while Facing Realities. He is currently working on the next book in the series: how game-changing technology can enable different airlines to transform their business models to adapt to the fundamental and structural transformation of the global airline industry.