US airline yields are crumbling, despite massive cutbacks in capacity in recent months. Collapsing airline yields suggests a recovery in the underlying US economy is still some way off.

Pacific yields fell 2.9% last month, following a 1.4% reduction in Jan-2009 and are expected to continue to ease as more capacity enters key markets to China and Australia in coming months.

Domestic yields slumped 8.7% in Feb-2009, following a 3.5% reduction in Jan-2009. It is a sharp turnaround from the double-digit increases in domestic yields experienced just six months ago (in Sep-2008). 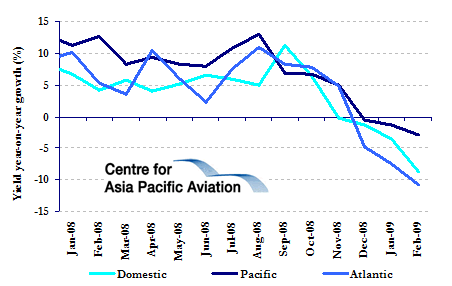 The weakness on the Atlantic has meant that Pacific yields, which have traditionally been the poorer cousin, have finally caught up. If trends of recent months continue, Asia Pacific airlines could expect to see more US airline tails at their home airports in the months ahead, as US carriers chase better margins and Atlantic routes bathe in red ink. 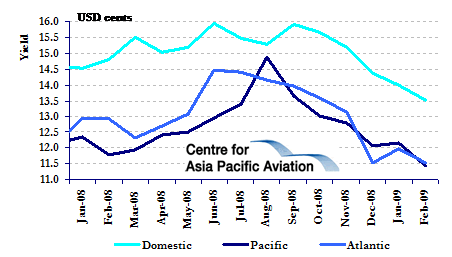 Depressed yields will hit first quarter profitability, although US carriers are benefiting from substantially lower fuel prices year-on-year (albeit with one-off charges related to hedging losses). Meanwhile, the weak US dollar lowers the cost bases of US carriers relative to their peers, raising their international competitiveness.