US stocks were flat last week as speculation that Dubai would defer its debt repayments unnerved investors and spurred concern that the recovery of the global financial system would be affected. This overshadowed an improvement in American jobless claims and home sales, negating gains earlier in the week.

Spicejet unaware of any change by 13% shareholder, Istithmar

In related news, SpiceJet stated it was unaware of any changes in the investment strategy by Dubai World's Istithmar, which owns 13% of the LCC. SpiceJet shares were down by 4.4% on Friday, having fallen by as much as 7.7% in intra-day trading.

Allegiant Air (shares down 2.1%) stated it expects 20% growth over the next four to five years, as the carrier continues to expand its successful model of providing services from small US cities to leisure destinations.

According to CEO, Maurice Gallagher, “we think there are 30 or 40 more (cities) out there where this will work for us”. Allegiant has been profitable for the past 27 quarters, with more cash on hand (USD222 million) than debt (USD55 million).

Also in the Americas, GOL’s shares were down 2.3%, with Southwest and JetBlue slipping 1.2% and 0.4%, respectively.

In Europe, Ryanair CEO, Michael O'Leary, in an interview with RTE Radio, stated he expects to retire as CEO in two to three years. Mr O'Leary, who has pushed out the projected retirement date several times, stated he would like to see the takeover of Aer Lingus before he retires.  Ryanair’s shares were up 3.2% on Friday. 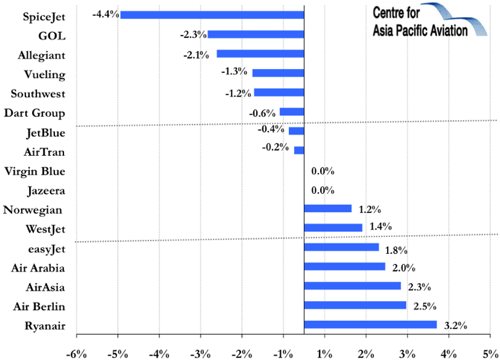