US LCCs Allegiant and AirTran fare well on Friday, but Southwest still out of favour.

After their slump on Friday, Japanese stocks soared today to lead Asian markets higher as investors brushed aside a survey showing business confidence plunged, hoping for a U.S. interest-rate cut and after the Bush administration said Friday it would step in to prevent a failure of U.S. automakers. Japan's Nikkei average jumped +4.6%.

After shedding around 6% on the previous day, Allegiant (+9.0%) and AirTran (+8.0%) were boosted on generally better sentiment in the market that low cost operations were looking good, especially for well positioned companies, but the cooling ardour for Southwest was still apparent (which was down 7.6% on Thursday), as fuel prices remained low.

But the good news was that no airline lost market cap on the day - a rare occurrence in these times. 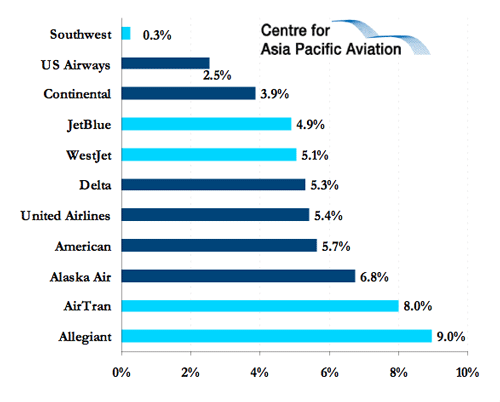