US LCC stocks slipped on Tuesday, as the broader market declined for a second day after US home sales for May-2010 dropped.

Midwest Airlines, over the past few years, has seen a decline in its home market of Milwaukee. But now that it is rebranding to Frontier, it is recovering, increasing market share in April by 3 ppts, according to figures released by General Mitchell International Airport. Interestingly, it also reported a clerical error that double-counted some passengers and slightly inflated AirTran’s market share since the beginning of the year.

For April, AirTran’s share stood at 28.8% compared with Midwest/Frontier’s 35.3% share. The airport erroneously reported AirTran had broken the 30% mark earlier this year. In March, AirTran market share was well short of the 30% mark at 20.3%.

Southwest, with only eight flights in the market, and with dismal ticket counter facilities, trailed the two rivals at 8.5% of market share. 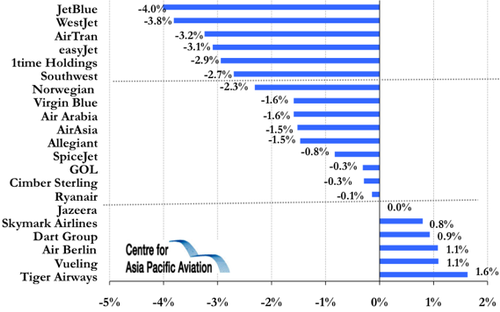