Shares in Brazilian LCC GOL slipped 3.4% yesterday in New York on a day when international companies trading in New York closed lower on concerns that recent signs of economic weakness overshadowed an upswing in deal activity.

In more positive news for GOL, Zacks upgraded its recommendation on GOL from "underperform" to "natural" due to optimism about the continued increase in passenger traffic and the carrier’s fleet renewal programme. However, Zacks warned about a potential “intense” competitive environment particularly due to the merger of two major Latin American airlines, LAN Airlines and TAM.

In the US market, shares in Allegiant slumped 5.1% yesterday. In other Allegiant news, SmarTrend stated Allegiant travel has the lowest beta in the airline industry, with a beta of 0.8, followed by Ryanair (0.9), China Eastern (1), Southwest (1) and Alaska Airlines (1.1). Low-beta stocks have minimal volatility and are consequently generally considered to be lower risk and offer more stable returns.

Meanwhile, Farecompare.com predicted that domestic fares would be 16-20% higher in autumn 2010, compared with autumn 2009 levels, as demand recovered following the 2009 economic crisis. However, Farecompare added that fare increases in the post-summer travel season would likely be restrained due to lingering concerns about the economic recovery. 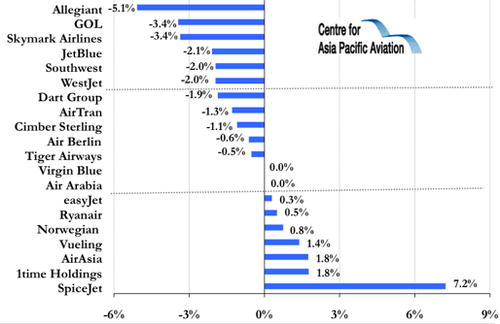