The US Conference Board Consumer Confidence Index declined sharply in Jun-2010, from 62.7 in May-2010. It had previously been rising for three consecutive months. According to the Board, “Consumer Confidence…retreated sharply in June. Increasing uncertainty and apprehension about the future state of the economy and labor market, no doubt a result of the recent slowdown in job growth, are the primary reasons for the sharp reversal in confidence.”

This strength in discretionary travel confidence may reflect a widening gap between the 'haves and the have-nots'. Those in full time employment are still able to enjoy some good bargains, while the job market stagnates and offers little comfort for the unemployed.

Meanwhile, jobs in the airline industry are certainly harder to come by; earlier this month, the US BTS reported that employment in US air passenger airlines declined 4.1% in Apr-2010, year-on-year; this follows a 5.5% reduction in Apr-2009. This does however in most cases broadly reflect the direction of major airline capacity over the same period.

Not all the signs are consistent. Air freight, which is generally a good indicator of forward business activity, however continued to surge in May-2010.

Reporting yesterday, IATA announced that North American air freight was up a very healthy 35.3% year-on-year in May-2010.  Global air freight volumes were up 34.3% year-on-year for the month and well above the levels of 2008. According to IATA, “Both air travel and air freight market are now higher than pre-recession levels and appear to have considerable momentum, outside of European travel markets.”

The growth was strongest in the Asia Pacific region (accounting for 45% of global traffic), with an increase of 38.7% year-on-year.

But a chill wind of sentiment sweeping the US pushed the stock market down, taking with it all airline stocks in the Americas. The Dow Jones Industrial Index fell 2.7%, slipping below 10,000, to 9,870.

No airline was spared, with no discernible pattern in those which were worst, or less, affected. Allegiant Air (-1.8%) and WestJet (-1.8%) fared best on a bad day. 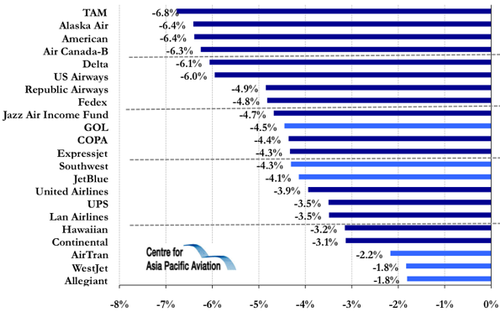