US airlines reported improved demand, yields and load factors in Dec-2010 and throughout FY2010, driven by an improving demand and economic environment and airlines’ careful capacity management strategies. In 2011, continued positive trends in passenger yields and unit revenues are expected to continue in the single digits, linked to the steady recovery of high-fare business travel demand.

This is a much-improved operating environment for US carriers, after a challenging 2008 and 2009 when travel demand was battered by the recession resulting in combined losses of USD12.3 billion. As a result, airlines sharply cut back on capacity growth, with a capacity (ATKs) reduction of 2.8% in 2008 and 6.6% in 2009, according to IATA, as carriers’ grounded aircraft, deferred orders and consolidation activity increased.

North American carriers are however expected to report a much-needed USD5.1 billion profit in 2010, followed by a lower USD3.2 billion profit in 2011. While capacity was added back into the market in 2010, US airlines continued and continue to strictly control the supply of seats, with capacity growth of 4.2% anticipated compared to traffic (TKPs) growth of 10.9%, based on IATA forecasts. Domestic capacity growth remained in the single-digits among the major carriers in 2010.

The Air Transport Association of America (ATA) reported that passenger revenue, based on a sample group of carriers, rose 9% in Dec-2010, marking the 12th consecutive month of revenue growth and reflecting the ongoing strengthened demand for air travel as airlines enter 2011. Miles flown by paying passengers rose 3% while the average price to fly one mile rose 6%. Passenger revenue increased 6% domestically and 16% in international markets.

United Continental Airlines and JetBlue have reported PRASM growth in every month of 2010 with the exception of Jan-2010, while Southwest Airlines has reported growth in this area since Sep-2009 and US Airways has witnessed RASM growth since Jan-2010.  See appendix for RASM and PRASM development graphs that highlight these trends.

Source: Centre for Asia Pacific Aviation and airline reports
^ In Dec-2010, the carriers implemented a revenue sharing structure for their trans-Atlantic joint venture, retroactive to 01-Jan-2010. While the impact of the JV obligations for the 1Q through 3Q2010 will be booked as a charge in Other Operating Expense in United Continental Holdings’ statement of consolidated operations, the 4Q2010 impact and all future adjustments will be booked as adjustments to passenger revenue. The 4Q2010 adjustment, which was booked entirely in the month of Dec-2010, reduced the carriers’ December consolidated PRASM by approximately 1.0 point and is included in the above consolidated PRASM estimate.
~JetBlue's PRASM for Dec-2010 was primarily impacted by two items. The severe weather in the Northeast reduced JetBlue's passenger revenue by approximately USD30 million, which is included in the December PRASM estimate, and reduced operating income for the fourth quarter by about USD25 million.  JetBlue previously disclosed that it expected to record approximately USD15 million of non-cash revenue in December, related to the expiration of TrueBlue points resulting from the migration to a new customer loyalty program. Upon further review, USD12 million of this TrueBlue revenue will now be recorded in the period from 2006 through 2009, during which the points expired. JetBlue now estimates that approximately USD6 million in expired TrueBlue points will be included in Dec-2010 passenger revenue. Pending completion of its review, JetBlue has excluded the revenue impact of expiring TrueBlue points from the year over year Dec-2010 2010 PRASM estimate

The US majors are gradually and cautiously adding capacity back into the market, with single-digit capacity growth in the month ranging from 5.6% at Southwest to a 1.6% capacity reduction at United Continental.

Source: Centre for Asia Pacific Aviation and airline reports
^ Network carriers traffic figures based on domestic figures
~ Passenger based on enplaned passenger data. Revenue passenger totalled 7.3 million in the month, a 3.7% year-on-year increase
+ Based on North America data
* Based on domestic data
> Based on total system data

As is usually the case, capacity growth was more pronounced at the smaller Allegiant, with American Eagle and Canada’s WestJet also reporting double-digit capacity growth. 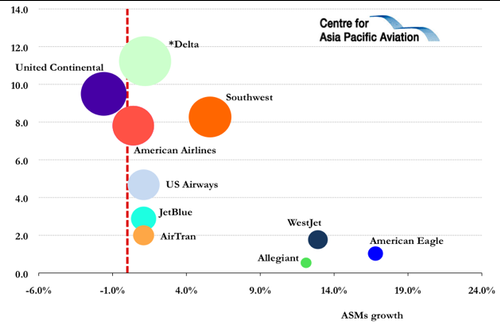 The trend was similar in the full year, with growth among the major network carriers reporting capacity growth in the -2.1% to +0.7% range. Growth at the LCCs was slightly higher, albeit in the single digits with the exception of the smaller Allegiant and American Eagle and Canada’s WestJet. 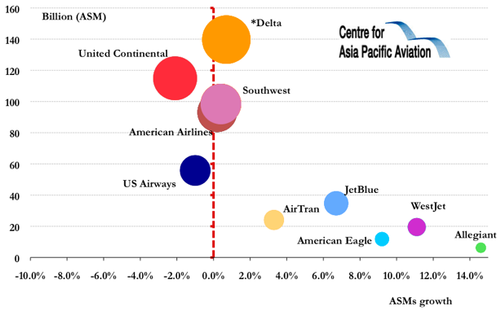 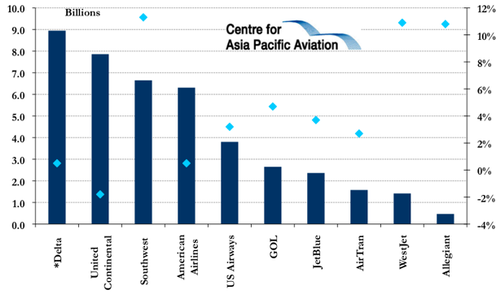 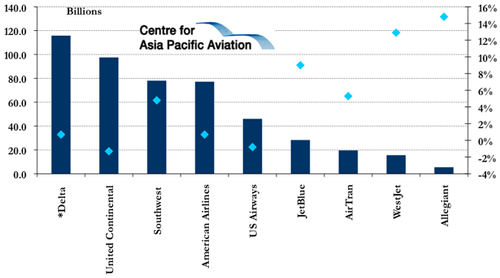 Record load factors for US carriers

Load factors ranged from 82.8% for United Continental to 78.9% at AirTran while Southwest, which has worked hard to boost its load factor levels, reported a load factor of 80.4%, a new record for the carrier, and up 4.2ppts from the old record set in the previous December.  The carrier has trimmed its aggressive growth over the past years, with load factors improving as a result. Dec-2009 marked the first time in its history that it had filled more than 70% of its seats in a December record.

Meanwhile, US Airways stated its mainline total-system passenger load factor of 80.8% was a record for the month of December while Frontier’s 77.9% load factor was also a new record. 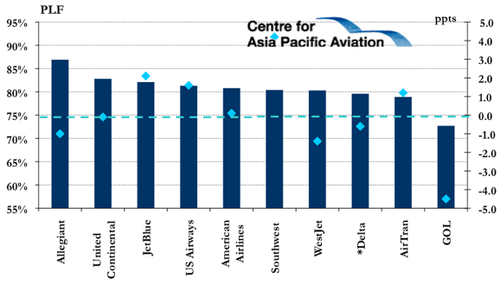 Similar trends were witnessed in FY2010, with load factors ranging among the majors being above 80% with the exception of Southwest, which reported a full-year load factor of 79.3%. This was also a record for the carrier, up 3.3ppts from its 2009 record. 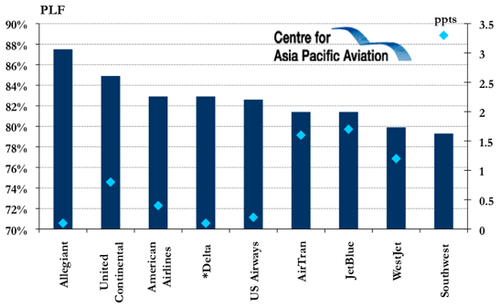 Dec-2010 was also characterised by snowstorms and poor weather which had a negative financial impact in the month.

JetBlue stated its operating performance was adversely affected by snowstorms in the north-east during the last week of Dec-2010 resulting in the cancellation of approximately 1400 flights over five days. JetBlue CEO Dave Barger commented: "Due to high load factors over the peak holiday travel period, we were unable to re-accommodate many customers on other flights and recapture revenue.” The weather reduced JetBlue's passenger revenue by approximately USD30 million and reduced operating income for the fourth quarter by about USD25 million

US Airways, meanwhile, commented that the “last two weeks of December presented a challenging operational environment due to snowstorms in Europe and throughout the north-eastern part of the US”. However, the carrier noted that despite the adverse weather over the holidays, it posted its best December on-time departure, arrival and baggage handling performance since 2005. Delta put the cost of the severe winter weather throughout the US and western Europe at a USD45 million reduction in net profit.

Another positive sign for the industry is that US business travel spending is expected to increase in 2011, due to higher-than-expected GDP, stronger exports and strong corporate profits. 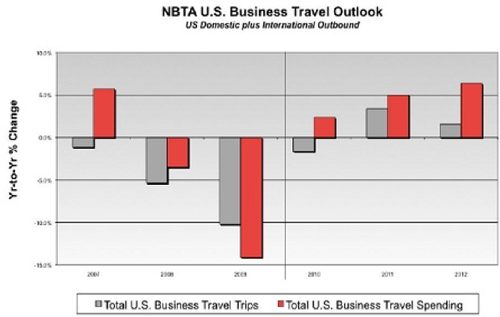 Returning demand, continued capacity control and improved load factor have enabled fare increases in the market, boost unit revenues and yields, and hence revenues and profitability. Already this year, the carrier has increased domestic fares, in the range of USD4 to USD10 per return flight, marking the third airfare increase in a month.

Meanwhile, US Airways CEO and Chairman Doug Parker noted that the airline industry is going through a “rational recovery” – there are no new airlines selling seats at a loss to gain market share and industry as a whole is adding capacity in a cautious manner, partially aided by the flurry of consolidation activity in the US market.

Mr Parker said: "There have been fundamental changes made in this business. Consolidation is a huge one that has made an enormous difference beginning with the US Airways, America West merger, followed by the Northwest, Delta. Our goal was always to get the industry more rational and I think we've played a large role in that with our own merger as well as helping compel some of the others. I am not about to suggest that rising oil prices are good for the business. It's gonna increase our cost, but what I know is, because of the changes we've made over the last couple of years in this business, we can withstand this."

Meanwhile, US Airways President Scott Kirby this month noted that the carrier enters 2011 “from a very solid operational and financial position”. The general tone is cautious optimism, with the industry now profitable again after a tough few years. With improved profitability and consolidation activity now settled, the US airline industry is now focussed on enhancing profitability and improving their competitiveness with product enhancement and fleet renewal announcements. 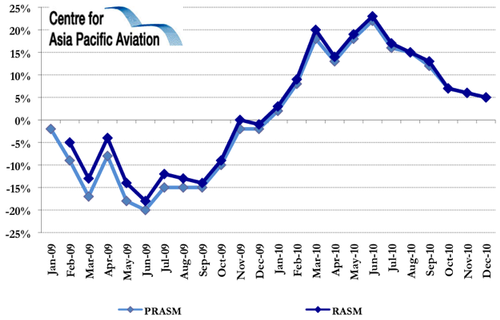 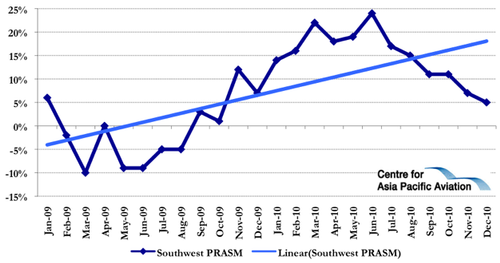 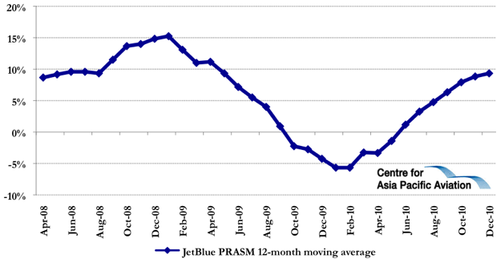 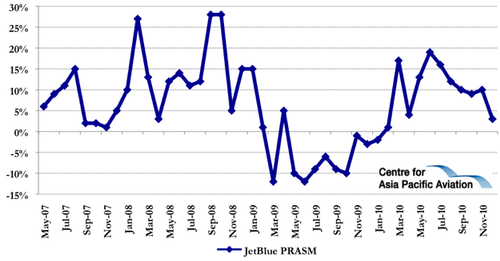 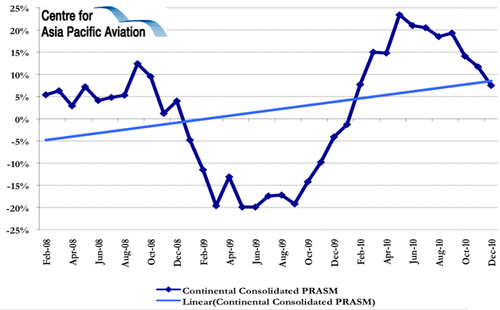 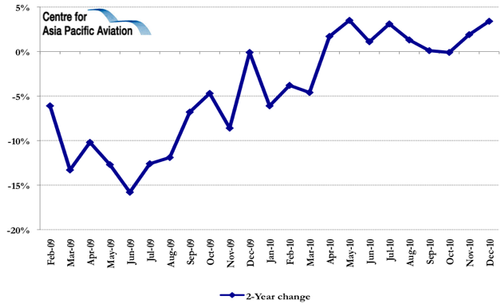 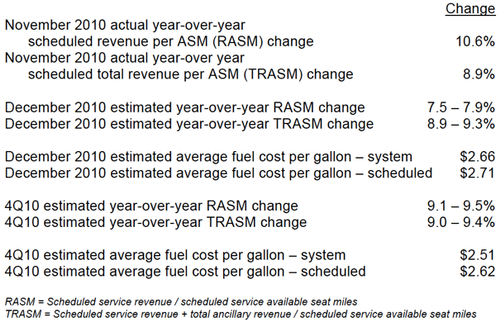