US airline investors seemed indifferent to whether merger activity was under way or not in the first half of this year. After seemingly being spurned by United as a partner, US Airways stocks have gained 80.5% in the first six months of 2010. Yet at the same time, as United seeks authorisation to combine with Continental Airlines, both of those carriers’ shares have also performed strongly, with United up a stirring 60.6% and Continental up 21.3%.

Of the US carriers, unaligned (or, alternatively, multiply aligned) Alaska Air was another which has shown strongly, with its stock up 28.9% in the six months.

Delta (+4.7%) was the other major legacy airline to gain, while American Airlines, increasingly attracting doubts over its cost base, was alone in losing 11.2% off its value.

But the regional jet sector’s woes were encapsulated in Expressjet’s sad performance, the company’s stocks losing 43.6% in the half. With a new CEO now in place, investors in the carrier will be looking for upside.

Meanwhile Air Canada, after a very difficult year in 2009, where it had to be rescued from bankruptcy by its government, has seen its B shares gain over a third since 1-Jan-2010, up 34.1%).

In a volatile marketplace, the main low cost airlines generally held their ground in the six months to 30-Jun-2010. Only GOL moved significantly, with Southwest Airlines (-0.6%) hovering around the baseline. JetBlue lost 1.3% of value and AirTran was down 6.4% and holiday operator Allegiant shed 11.1%. 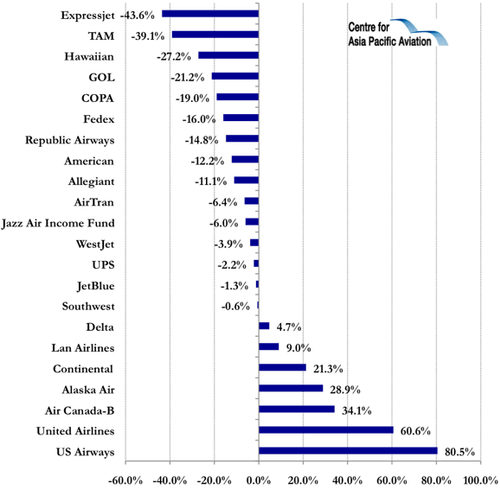 Stocks were mixed yesterday, with Delta gaining close to 4% and AirTran losing 2.2%. 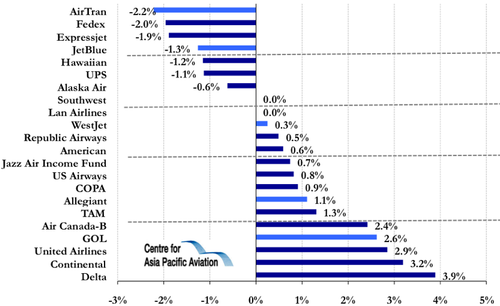