A continuation in the fall of oil prices (-0.9%) to USD71.43, led the majority of North and South American carriers’ stocks to gains on Wednesday (26-Aug-09). Oil prices have slipped since the announcement of new US Government data showing oil stocks increased last week, suggesting demand is currently low.

The AMEX Airline Index (+1.3%) consequently ended trading up, while the Dow remained unchanged from the day prior.

Continental (-0.4%) also announced changes to its baggage charges on the day for passengers travelling between Europe and the United States, including US territories such as Puerto Rico and the US Virgin Islands. Effective 27-Aug-09, customers who purchase economy class tickets for travel on or after the effective date will be able to check one bag for free and will pay USD50 for a second checked bag.

US Airways shares have been on the rise over the past month, ending trading on 26-Aug-09 at USD3.76. 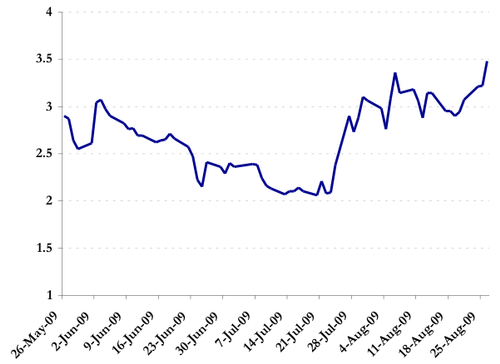 Southwest (-0.9%) meanwhile fell the most on the day, following news the FAA is investigating the carrier over the use of unapproved parts in repairs.

GOL (-0.7%) also continued its slide, after announcing plans yesterday to raise up to USD355 million in a global share sale. Citigroup analysts stated the carrier’s offering suggests it may not regard its current stock price as cheap. The LCC currently trades at 16 times its estimated profit, compared to TAM, which is trading at 6.6 times its estimated earnings. 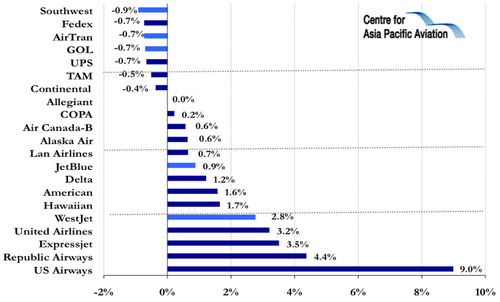