US Airways lower; American Airlines not threatened by potential merger; Continental up

North and South American carriers’ shares were mixed on Friday (09-Apr-2010), following a surge on the day prior on news of a possible merger between United Airlines (+1.3%) and US Airways (-3.1%). However, a number of forecast losses for US carriers for 1Q2010 pushed shares back down to earth on Friday.

In the wider market, the Dow (-0.6%) was up, pushed higher by the energy sector. Investors were also positive ahead of the start of reporting season this week.

US Airways' (-3.1%) shares dropped back after reaching 52-week highs the day prior, on reports of a potential merger with United Airlines (+1.3%). The merger would reportedly be an all-stock deal, with United paying US Airways shareholders a premium similar to that of the Delta-Northwest merger. The carriers are also negotiating a break-up fee and reverse break-up fee of between 2-6%, to be implemented if either carrier walks away from the deal.

American Airlines not threatened by potential US Airways/United Airlines merger

American Airlines (-1.0%) shares fell, despite CEO, Gerard Arpey, stating during trading that the carrier is not threatened by reports of a United-US Air merger and is well positioned with hubs at Dallas, Chicago, Miami, New York and Los Angeles.

SmarTrend analysts also expect JetBlue (-0.2%) to report a loss for the quarter, but expect Southwest (-0.8%) to post a profit.

Continental Airlines (+1.4%) was up after Jesup & Lamont reiterated a ‘Buy’ rating on its stocks during trading, with a target price of USD26. Becker stated the company believes Continental’s shares can trade to 10 times estimated 2011 EPS of USD2.60 per share. Jesup & Lamont now expect the carrier to report an EPS loss of USD0.96, down from its previous estimate of a profit of USD0.10, due to higher non-fuel costs and weather-related cancellations in Feb-2010 and Mar-2010. 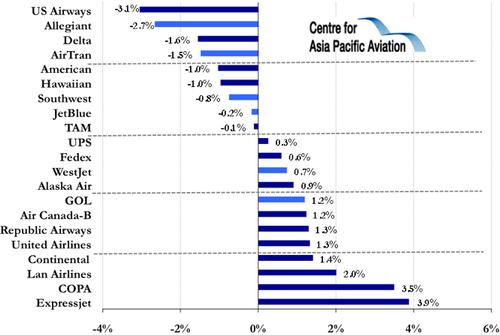