US Airways loses USD30 million in sales from storms

North and South American carriers’ stocks were mixed on Wednesday (03-Mar-2010), on varied traffic results from US carriers. Stocks also tended to move with the wider market, with the Dow (-0.9%) slipping, after the US Federal Reserve stated loan demand was still weak. However, losses were trimmed by the release of Greece’s new austerity measures to overcome its debt issues and a smaller than expected drop in private sector job losses for Feb-2010.

Also pushing airline stocks down was a 1.5% gain in oil prices, to back above the USD80 mark, closing at USD80.87. The AMEX Airline Index ended trading flat.

US Airways losses USD30 million in sales from storms

US Airways (-2.7%) took the day’s biggest fall after claiming the severe winter storms in Feb-2010 cost the carrier USD30 million in lost sales. As a result of the storms, US Airways was forced to cancel thousands of services and suspended operations at three of its hubs for six days.

The carrier also fell on news analysts at Jesup & Lamont downgraded the carrier’s rating from ‘Buy’ to ‘Hold’, after the stock went past its USD7.00 price target. The analysts also lowered its full year earnings per share (EPS) estimate for the airline from USD0.70 to USD0.51, based on its losses during the storms.

US Airways reported during trading a 0.7 ppt year-on-year improvement in consolidated load factor for Feb-2010, to 77.2%, as a 4.8% decline in traffic (RPMs) outweighed the 5.6% reduction in capacity (ASMs).

United Airlines (+2.1%) was meanwhile one of the day’s best movers.

LAN down marginally after resuming some Santiago services 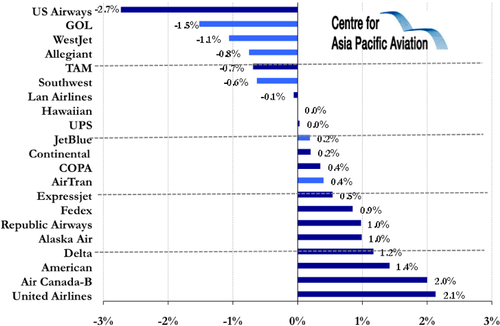