US Airways and United Airlines in talks to merge

North and South American carriers’ stocks moved lower with the wider market on Wednesday (07-Mar-2010), following news US consumer credit fell by USD11.5 billion in Feb-2010. Shares were also down on continued concerns over Greece’s ability to pay off its sovereign debt. The AMEX Airline Index was down 1.66% as a result, despite a 1.1% decline in oil prices, to USD85.88.

US Airways and United Airlines in talks to merge

US Airways (-3.7%) took the session’s biggest drop. Reports emerged late in trading that US Air is in merger talks with United Airlines (-2.7%) parent, UAL Corporation. United and US Airways were previously in merger talks in 2000 and 2008, with the carriers having to withdraw on both occasions after opposition from unions. Both carriers have recently called for consolidation in the US airline industry to improve revenues and reduce costs. However, both rose in after-hours trading, with US Airways gaining 13.3% and United Airlines rising 5.5%.

Southwest Airlines (-1.1%) also reported an improvement in load factor for Mar-2010, up 3.7 ppts, to 81.0%, as traffic rose 0.4% on a 4.2% reduction in capacity. Passenger numbers were not quite as strong, with the LCC reporting a 0.4% rise in passengers carried, to 7.7 million. The carrier meanwhile estimated passenger revenue per ASM to have increased in the 22% year-on-year range.

Elsewhere, Republic Airways (+6.8%) shares lifted, ahead of its announcement of the branding for its combined Frontier and Midwest airlines on 13-Apr-2010. The day prior, the carrier reported a 59% year-on-year increase in passenger numbers in Mar-2010, to 2.7 million. Load factor was also up 7.0 ppts, to 80%. 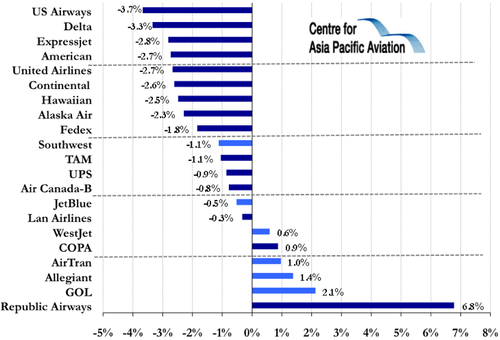