US Airways and American Airlines traffic results push stocks down, Air Canada up

The majority of North American carriers fell on Wednesday (06-Jan-2010), softening the impact of strong gains made the day prior. The Dow wavered throughout trading, following reports the US economy lost 84,000 jobs in Dec-2009, which was greater than expected, but the smallest loss in almost 12 months. Stocks were also affected by news the labour market is stabilising, with low interest rates to be maintained for some time.

Following positive results by Continental Airlines (-3.6%) and United Airlines (-4.6%) on Tuesday, traffic results from US Airways (-4.3%) and American Airlines (-3.0%) were less encouraging to investors.

According to President, Scottt Kirby, consolidated passenger revenue per ASM (PRASM) decreased approximately 2% year-on-year, while total revenue per ASM fell approximately 1%. Mr Kirby stated the carrier was pleased with the result, which continued to show improvement with “positive trends in both booked yields and corporate revenue”.

American Airlines’ results were slightly more positive, with the carrier reporting a 1.4 ppt increase in load factor for Dec-2009, to 80.6%, as traffic fell 1.6% and capacity fell 3.3%. Passenger numbers dropped 2.8% for the month, to 7.1 million passengers.

Air Canada and WestJet up on more positive traffic results

Air Canada’s (+3.2) stocks rose the most on Wednesday, after reporting a 0.5 ppt year-on-year reduction in load factor for Dec-2009, to 81.2%, while load factor for the full year of 2009 fell 0.7 ppts to 80.7%. However, Air Canada said it was happy with the minor falls, with CEO, Calin Rovinescu, stating the results "underscore the effectiveness of our on-going disciplined approach to managing capacity in a difficult economic environment”.

The slip in load factor in Dec-2009 was the result of a 4% year-on-year increase in capacity (ASMs), as traffic (RPKs) rose 3.4%. Meanwhile, for the full year, the decline in traffic outweighed the reduction in capacity, down 5.2% and 4.4%, respectively. 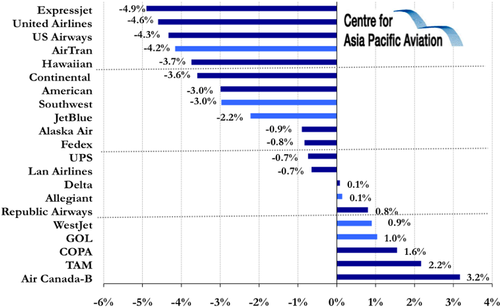