United Continental (+2.3%) made one of the day’s biggest gains after analyst Andrew Lecky stated the carrier may have the greatest upside potential among large US airlines. Stifel Nicolaus analyst Hunter Keay and CRT Capital Management Group analyst Michael Derchin both recommend the stock. The stock is inexpensively priced, according to Mr Keay.

Mr Lecky also stated Alaska Air (+1.6%) is one of the top performing smaller carriers. Morningstar Inc analyst Basili Alukos stated the carrier performs well because its local market is so small, no other airline can effectively compete with it in Alaska.

JetBlue (+1.0%) was up for the day after Nasdaq stated that after a recent market sell-off in the LCC’s stock, it issued a buy under price of USD6.80 for the carrier. Its trading target remained at USD8.30. JetBlue ended trading at USD6.78. 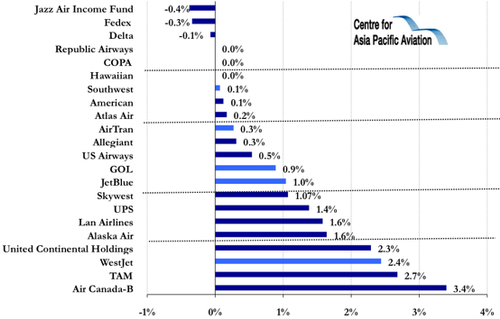