Delta has far greater exposure to Japan than other airlines. President Ed Bastion said that, unlike other airlines, it was not abandoning the Tokyo market and Delta will be an active participant in the rebuilding of the market.

“For the short term - two to three months - there will be a drop off in demand, but over the balance of the year as the country builds, there is going to be a significant demand pick up,” he said. “Our expectation is this will be a one-time, six- to nine-month event.”

He reported that 8% system revenue touches Tokyo, amounting to USD2 billion annually generated from Tokyo. Delta will suspend Haneda service and thin Narita as it strips capacity in the market by 15-20%. It expects to take a USD250-400 million hit this year but Mr Bastion emphasised that that estimate was very preliminary.

“We’ll monitor how demand comes back,” he said, “but our expectations is the market is resilient and we’ll be well positioned to serve the market as soon as recovery takes shape.”

Dahlman Rose Analyst Helane Becker noted Delta has 140,000 weekly seats in the Japan market compared with 81,000 for United. As the markets recover, Delta will be up-gauging overflights into China in addition to using SkyTeam partner Korean Air to back fill capacity within Asia. Mr Bastion also assured investors that the unused equipment will not be brought into the softening Atlantic market.

For its part, American, with only 5% of its total capacity in Asia, is moving ahead with no changes to its JAL joint business plan. Vice President Corporate Development and Treasurer Beverly Goulet indicated American would be relying on the JAL connections, “the largest and best network in Asia” for increasing access to interior Asian points. The American/JAL JV launches on 01-Apr-2011 when American will also launch its Los Angeles-Shanghai service. She noted that 50% of the Japan traffic was connect traffic making the JAL connecting schedule of paramount importance.

“We believe we have the right partner in this situation and it puts us in a better position as we work our way through these events,” she told investors. 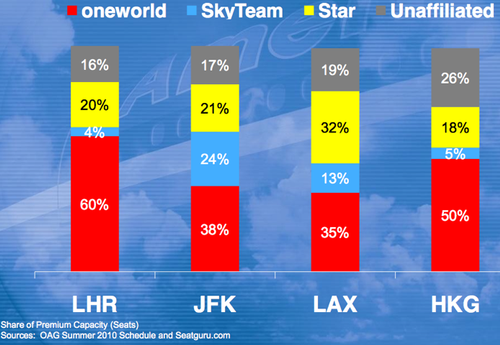 Interestingly, JP Morgan Analyst Jamie Baker expressed surprise and disappointment that American didn’t impose an additional capacity cut than that announced a few weeks ago as a result of the Japanese crises. Ms Goulet noted American has been the industry leader in cutting capacity over the last four years. “We are monitoring the situation and we do have flexibility,” she assured him. 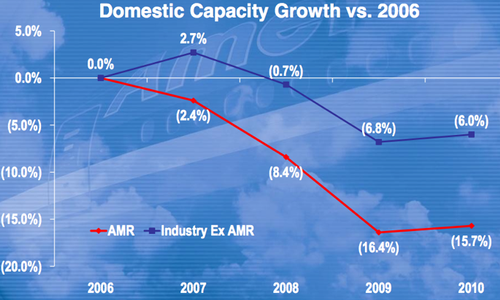 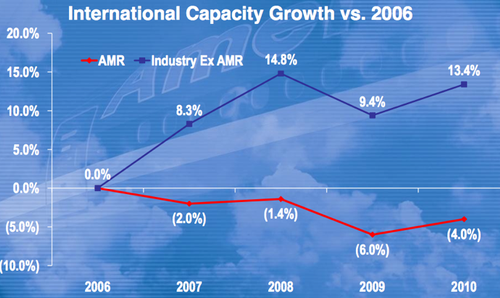 As a reflection of the ripple effect of the Japanese crises, US Airways experienced a drop in bookings and revenue. US Airways President Scott Kirby said the revenue environment was the strongest he has ever seen in his career but the Japanese crisis was creating a psychological drag on bookings as industry deals with supply chain uncertainty. He indicated advanced bookings showed a 20% drop in the first few days of the crisis with another 20% in the next few days after the earthquake.

“The first half of March, RASM was up 13% through 15-March,” he told investors. “The back half it was up only 3% which I think will be temporary, but I have no data to prove that. If you look at April it is up 12% so the underlying demand environment remains strong although Atlantic is underperforming in the first quarter. Even so, our best guess is that Atlantic, in the second and third quarter, will do as well or better than domestic demand.”