US airlines all gain on key Fed announcement and political news

US airlines all gained yesterday as the NYSE Arca Airline Index reached a 52-week high. Wider North American markets seesawed due to an anticipated Republican victory and the Fed’s announcement it plans to inject USD600 billion into the US economy to kickstart economic growth. The Dow industrials and Nasdaq indices closed at their highest closing level in two years.

US airlines all up on improved unit revenues and traffic

WestJet shares up on soaring profits and dividend news

WestJet (+4.5%) was the day’s strongest gainer after strong 3Q results and news that it plans to start paying dividends. The stock was among the most actively traded on the TSE after 760,000 shares changed hands, gaining 4.5% to close at CAD13.36 - their highest level since early May-2010.

The Calgary-based LCC reported strong quarterly results yesterday, with profits soaring 72% to CAD54 million or CAD0.37 cents a share, which outperformed analyst estimates. Revenue for the period increased 14% to CAD684.6 million. The quarter marks WestJet’s 22nd in the black.

Shares in the airline were also boosted by news it plans to pay its first-ever quarterly dividend of CAD0.05 cents on 21-Jan-2010 21 to shareholders on 15-Dec-2010. The company it will buy back up to 7.26 million (5%) of its outstanding stock over the next year.

The airline also announced a positive outlook for the rest of the year. Fourth-quarter capacity is expected to increase 13-14% year-on-year and RASM is also expected to perform well. WestJet will also introduced a CAD20 luggage fee for a second piece of checked luggage, which it expects to help with dividend payments. 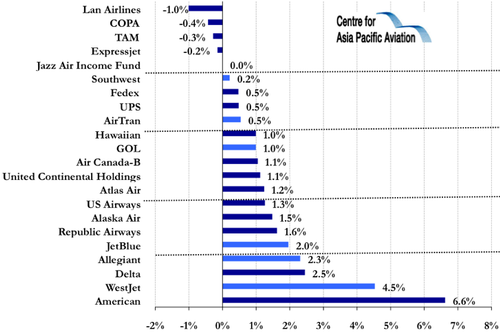