The Conference Board’s Leading Economic Index for the US declined 0.1% in Apr-2010, suggesting that through a recovery that will continue through the Summer, “it could lose a little steam”. 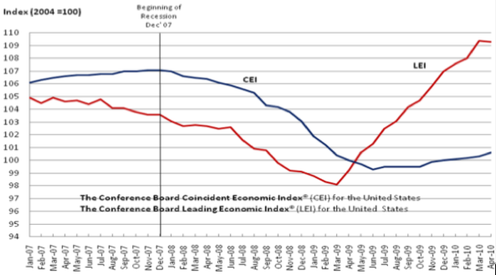 The Air Transport Association meanwhile issued its monthly passenger yield report showing double digit increases in yield across most regions during Apr-2010. Domestic yields, which rose 12.0% in Mar-2010 gained by 11.5% in Apr-2010.

Source: ATA
Note: The ATA report relies on data from Alaska, American, Continental, Delta, JetBlue, United, US Airways and their affiliated regional airlines. The results are not adjusted for inflation or trip length. The data is based on 100% of scheduled service for this sample group and reflects all "revenue" passengers, including those redeeming frequent flyer miles ($0 fare) for award travel. Results for a given month are typically available 22 days thereafter and are subject to restatement.

The Atlantic and Pacific routes showed the greatest gains with over 20% increases in yields. The Atlantic yield jumped 23.4% to 12.20 cents per revenue passenger mile. It was followed closely by the 22.1% increase in Pacific yield to 12.34 cents per RPM, reflecting the strong return of business passengers. Latin American yield rose 9.3% to 13.77 cents while domestic yield jumped 11.5% to 15.06. The performance is the fourth consecutive month for yield hikes for domestic and Atlantic regions, the third for Latin and the second for the Pacific region. 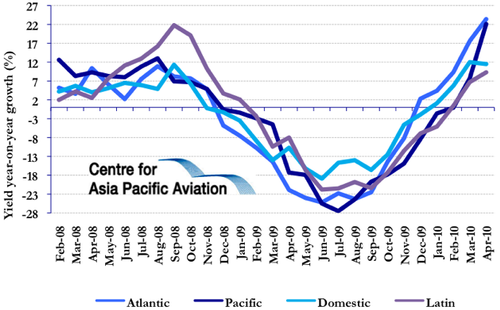 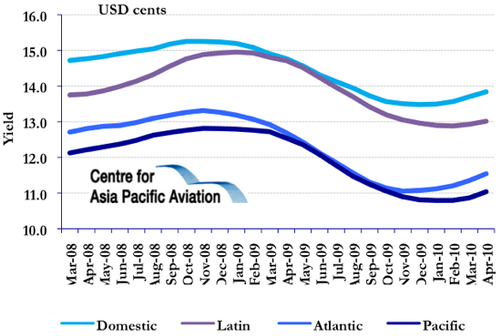 Elsewhere, American Eagle, CEO, Peter Bowler announced his retirement yesterday after a 26-year career at American and 12 years heading the regional carrier. He will stay on in his current role until a successor is named. He was also a member of American’s Executive Committee.

"It has been the highlight of my airline career to be the president and CEO of American Eagle," said Bowler. "I am grateful for the opportunity to have served with the wonderful people of American Eagle and am proud of the fact that we have successfully navigated more than 11 years of constant change."

Chair and CEO Gerard Arpey praised Bowler’s contribution to the company. "With a comprehensive understanding of the airline business and a deep concern for Eagle's people, he has overseen the transition of American Eagle to one of the largest regional jet operators in the world, offering over 1,600 flights a day to destinations throughout the U.S., Canada, the Caribbean and Mexico,” said Arpey. “I offer my sincere thanks for his leadership and many contributions to American and American Eagle.” 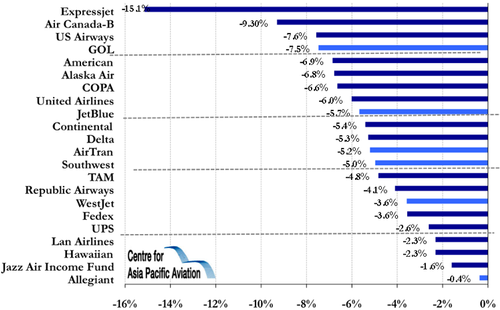