US airline stocks finally retreat, American Airlines down on back of 3Q2009 forecast

Costs are also expected to rise in Sep-2009, but not as much as the carrier had earlier expected. The carrier expects mainline CASM to total USD12.28 for the quarter. According to American, the increase is mainly due to reduced capacity, pension costs and resultant costs from attempts to improve reliability.

Analysts at Standard and Poor's stated American Airlines’ forecast was in line with what it was expecting, while Stifel Nicolaus noted that the carrier’s passenger revenue declines are less than its bigger competitors, as it did not expand into Europe in 2008, unlike others.

However, Jesup & Lamont downgraded the carrier’s rating from “Buy” to “Hold”, with a target price of USD8.30. According to the analysts, share prices are currently reflecting earnings improvement for 2010, and estimated American Airlines will report a 3Q2009 loss of USD1.00 a share.

Meanwhile, Southwest (-0.2%) CEO, Gary Kelly, stated during trading that he is now more hopeful the LCC will be able to maintain its 37 year profit record, dependent on fuel prices over the coming months. Mr Kelly stated, "we haven't conceded that we will lose money for the year," and that chances of reporting a profit for 2009 “are better today than they were 60 days ago”. The CEO added he has seen some signs of a recovery commencing for the airline industry. 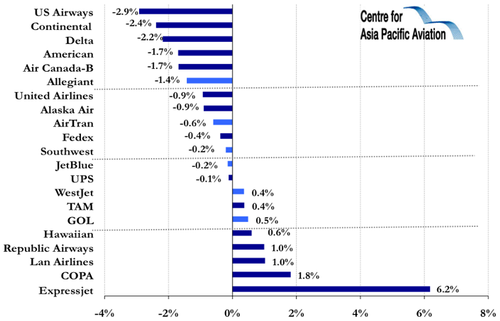