Uruguay's Pluna warns of collapse, but CEO's missive may be more political than financial

Pluna CEO Matthias Campiani has issued a warning of a potential collapse of Uruguay’s flag carrier, driven by sluggish Latin American economies and the restrictive policies of the region’s governments, particularly Argentina, which has practiced fierce protectionism since the renationalisation of flag carrier Aerolineas Argentinas in 2008.

Yet Uruguay's challenges in Argentina – where Pluna deploys 21% of international seats – are not new, as evidenced by the carrier's recent strategy to expand into Brazil instead. Argentina's protectionism has understandably been a sore point for Mr Campiani, who is resolute and will see that objectives are accomplished. While Pluna has encountered losses, it has in recent times broken even. There is no doubt Pluna has suffered from protectionism and like most carriers is seeing a downturn from global economic events, but a collapse is difficult to envision.

Pluna’s troubles appear to have been mounting recently as local news reports indicated the Uruguayan Government aimed to seek new private investors for the carrier as it recorded as USD18 million loss for the eight months ending in Feb-2012, although the carrier after years of losses had achieved break-even. The Government holds a 25% stake in Pluna while Latin American Regional Aviation Holdings (LARAH) accounts for the remaining 75%. Canadian regional operator Chorus Aviation is a 33% owner in LARAH. Local media reports indicate the Government has also recently indicated its desire that LARAH sell off its stake in Pluna to allow other investors to invest in the carrier, which reportedly requires a cash infusion of USD30 million.

The Uruguayan Government sold its majority stake in Pluna to investment fund Leadgate in 2007, and around that time Pluna began a restructuring that included the elimination of medium- and long-haul services and larger gauge aircraft. Pluna set up a hub at Montevideo as a transfer centre for traffic from lower South America, and now serves destinations in Argentina, Brazil, Chile and Uruguay with 13 Bombardier CRJ900s. During May-2012 it launched its first intra-Chilean flight from Santiago to Concepcion. 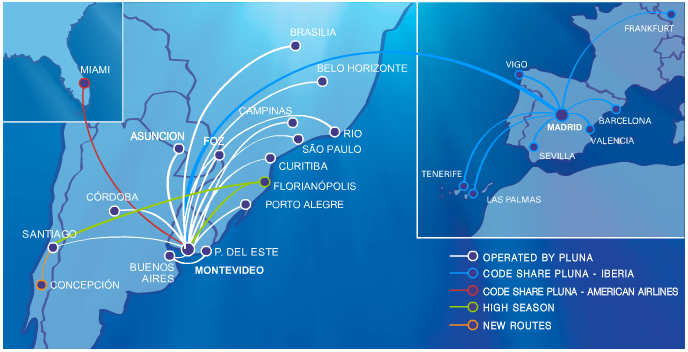 Mr Campiani issued a letter to employees on 04-Jun-2012 that was leaked to the local press outlining his frustration with artificial market constraints created by Argentinian currency control policies instituted in Nov-2011 that include a requirement for the country’s citizens to obtain government approval to buy dollars in the country. The Associated Press quoted Mr Campiani’s letter as he explained Argentinian traffic has fallen off significantly and created challenges in transferring money from its Argentinian operations to Pluna’s bottom line.

Pluna has almost constantly tangled with the Argentinian Government since its reorganisation, raising the question if Pluna's situation is serious or the leak of the letter was intentional and aims to serve political posturing. Pluna's larger difficulty in the Argentine market is not new. Argentina has constrained Pluna’s expansion in the country to protect Aerolineas’ traffic flows over Buenos Aires, rather than allow Pluna to siphon off some of those passengers – at the expense of the national and ailing carrier, Aerolineas Argentinas – to flow through Pluna's hub at the Uruguayan capital of Montevideo. Approximately 1.9 million passengers travelled through Montevideo Carrasco International Airport in 2011, a 15% jump from the year prior, but much of this reflects Pluna's change in strategy in recent years to expand in Brazil, the carrier having seen it faced significant external challenges in Argentina. Pluna has driven the bulk of Montevideo’s growth, and accounts for about 66% of the airport’s capacity. 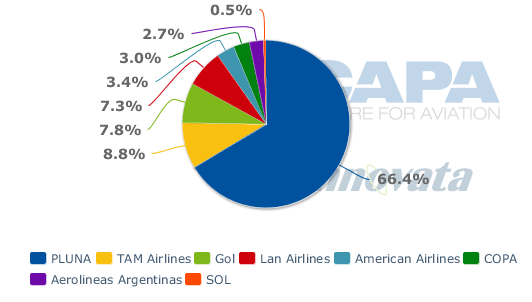 Mr Campiani also cited a slowdown in Brazil’s economy as another factor in Pluna’s dimming financial state. The country’s GDP growth for 2012 has been downgraded from 4.2% to 3%, while GDP growth of Pluna’s home country Uruguay has been revised from 4% to 3.5% after growing 6% in 2011 and 8.5% in 2010.

Uruguay is a small country whose domestic aviation market is very limited in growth opportunities. Its main airports are Montevideo and Punta Del Este, located in a popular resort area on Uruguay’s southeastern coast. Uruguay’s second carrier BQB, which launched operations in 2010, operates flights from Montevideo to Salta in Uruguay’s interior and Rivera, which is located on the border with Brazil. 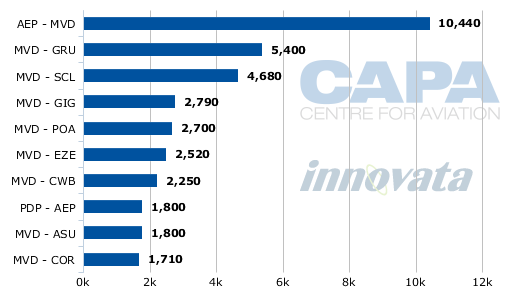 The Uruguayan government is unlikely to allow a scenario of Pluna collapsing, as that would only entail Brazilian carriers quickly entering the market. The upcoming merger of Brazilian regional carriers Azul and TRIP could accelerate Azul’s international expansion, which could also be hastened by opportunities created by the possible demise of Pluna. Azul is already planning to launch seasonal flights from Campinas to Punta del Este later this year.

Opportunities are few for other Uruguayan carriers to backfill capacity. BQB also operates service from its Punta del Este base to Florianopolis and Porto Alegre, and its route map indicates service to Iguassu Falls is planned. But Punta del Este has a different traveller base than Montevideo, which as Urguay’s capital serves mix of leisure and business traffic. 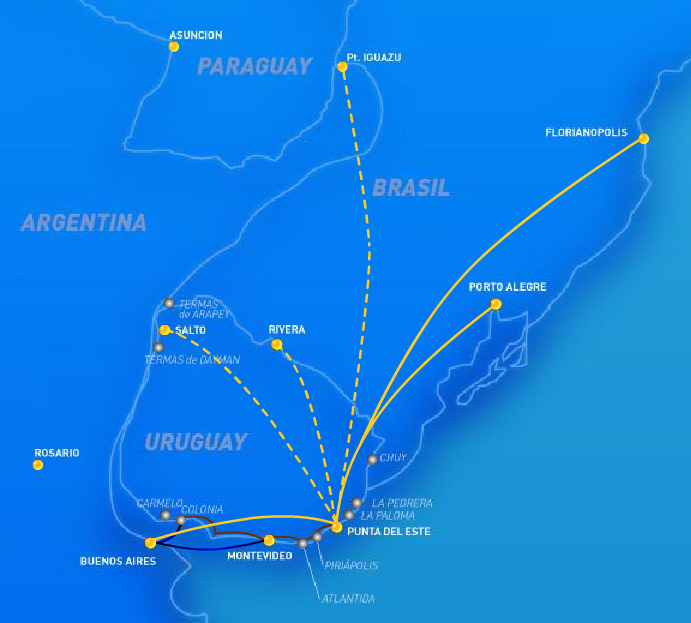 Aerolineas could gain a monopoly on Buenos Aires-Montevideo

While the bulk of Pluna’s service is comprised of flights to Brazil, downtown Buenos Aires Jorge Newberry Aeroparque Airport is its second largest base as it offers 10,400 weekly seats from Montevideo to Argentina’s capital. It also operates 16 weekly flights from Buenos Aires to Punta del Este. A withdrawal of Pluna from the market would leave Aerolineas Argentinas as the lone carrier to Jorge Newberry from Montevideo. Aerolineas' 768 weekly seats would be over-whelmed by Pluna's passengers on the route, which offers approximately 5300 weekly one-way seats. Argentina’s flag carrier has its own financial challenges, and has previously said it hopes to breakeven in 2013 after posting losses for the last four years. In 2011 CAPA reported the Government of Argentina had pumped USD1.5 billion into Aerolineas since its 2008 renationalisation while it bolstered its protectionist stance to ensure competition with the carrier was limited. Watching Pluna collapse as the result of a foreign challenge that will benefit from it is a scenario Uruguay will not want to see occur. 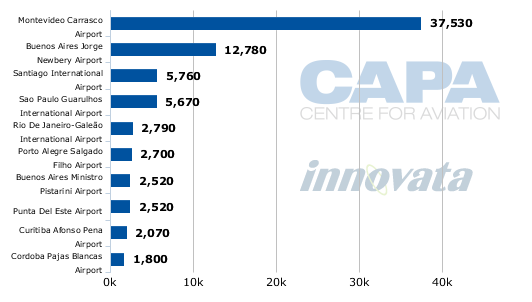 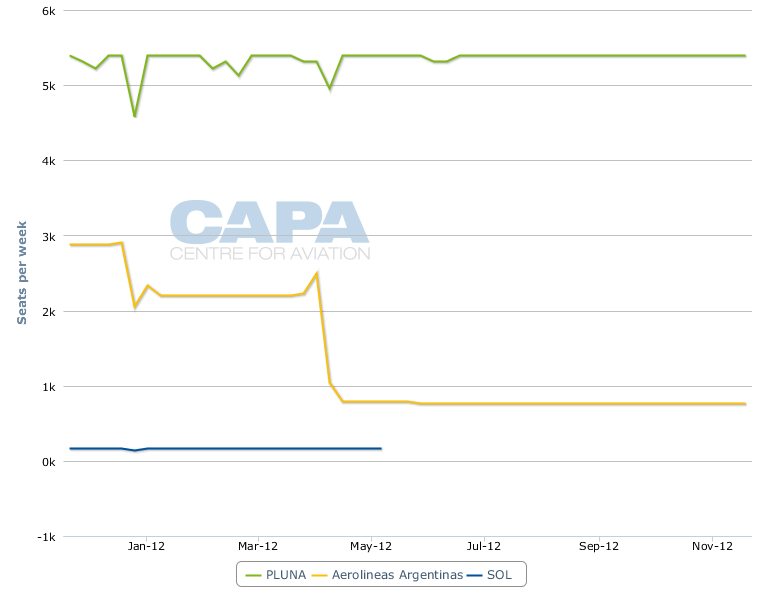 Pluna is the lone carrier on flights from Montevideo to Ezeiza, which is the main gateway airport in Buenos Aires. BQB’s route map shows the carrier also serves the Buenos Aires-Montevideo pairing.

Pluna’s financial woes appear in contrast to small Uruguayan carrier BQB, which was reportedly profitable during its last financial year. Its route maps indicate it plans expansion on its Montevideo-Salto pairing to Ascuncion in Paraguay, and an extension of its Montevideo-Rivera to Florianopolis. Its planned expansion from Punta del Este includes Salto, Rivera and Iguassu Falls. 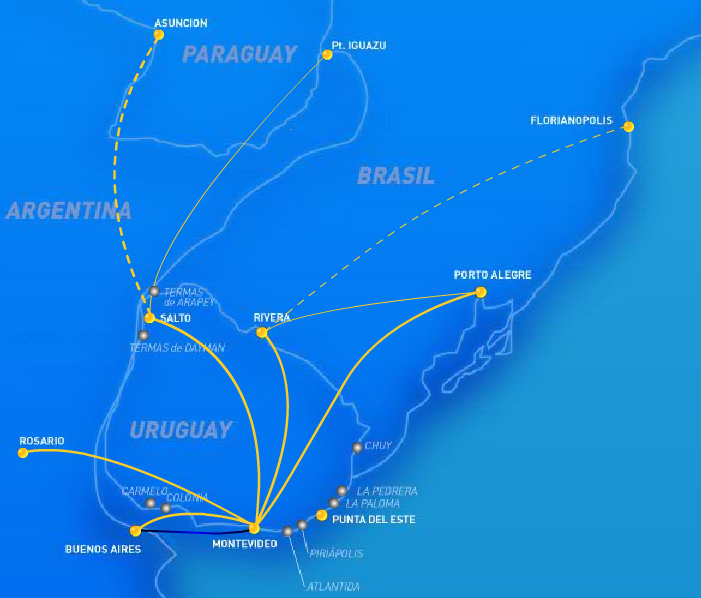 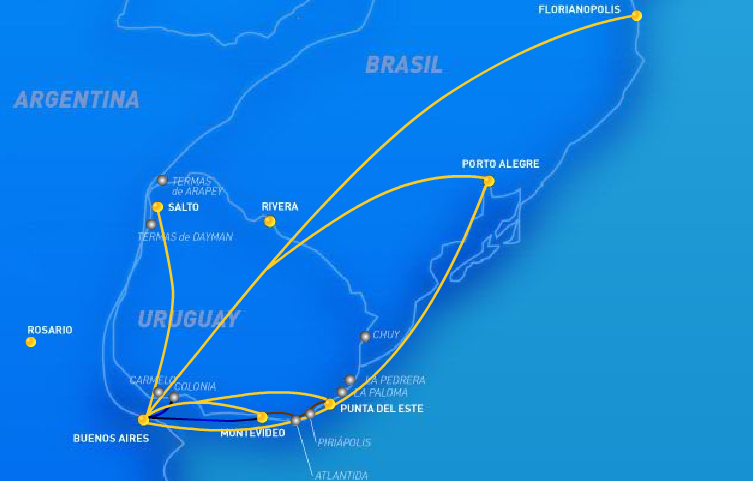 Prior to the May-2010 launch of BQB, which is a subsidiary of a Uruguayan tour operator Buquebus, Pluna argued the Uruguayan domestic market was too small for two carriers. BQB’s domestic flights to Salto and Rivera were viewed as risky due to Uruguay’s extremely small size. Its initial performance to Rivera was disappointing as it carried only 10,000 passengers during the first 11 months of operation. BQB carried 15,000 passengers on its flights to Salto during the same period.

Pluna’s current financial distress is a major setback for the carrier as it gained some fiscal traction during the last couple of years after its restructuring, and was achieving breakeven results in Apr-2011. Mr Campiani’s warnings of demise are probably partially a plea to Uruguay’s Government to attempt to reason with the Argentinian Government to ease some of its prohibitive protectionist policies. While the warning of a potential collapse has certainly generated headlines and roused the Government’s attention, it is highly unlikely Uruguay’s leaders would allow the country’s 76-year-old flag carrier to vanish into obscurity. There is no doubt work is going on behind the scenes to secure a new cash infusion for the carrier.