United Airlines is beginning a threatened 10% capacity reduction from its Houston Intercontinental hub (IAH) in Sep-2012 through the elimination of mostly small markets served by 50-seat regional jets and long-haul service to Paris. The carrier is following through on a pledge to reduce its footprint at its largest US hub following a politicised decision by Houston City Council to allow international flights from Hobby Airport, which currently only serves domestic destinations.

United and Southwest spent nearly all of 1H2012 attempting to convince the city of Houston that their respective stances on international expansion at Hobby would produce the most favourable economic outcomes. In the end Houston sided with Southwest, giving the carrier authorisation to push forward with the development of a new terminal at Hobby to support international service to Latin America and the Caribbean for a targeted 2015 launch. The city dismissed United’s arguments that international passenger spill to Hobby would be detrimental, and pressure the carrier’s performance on international routes from IAH.

In making its case to Houston officials, United warned that if the city pushed forward with the introduction of international service from Hobby the carrier would cut 6% of its current capacity at Intercontinental and 4% of its planned future supply growth at the airport. Immediately after Houston rendered its decision, United said it would initiate a 10% reduction in capacity at IAH beginning in late 2012. “We have been maintaining some unprofitable flying at IAH based on our projections that future growth at the hub would make those routes profitable,” United told its employees. Based on its current approximately 793,000 weekly one-way seats operated from IAH, United would shed about 79,000 seats on offer from the airport if it carries out the full 10% reduction in capacity. 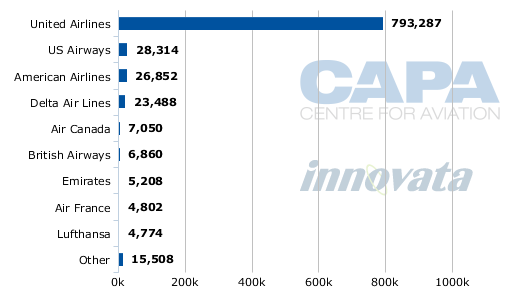 United has loaded changes into the GDS system showing flights from IAH to five small destinations are ending in Sep-2012. The carrier is eliminating flights to Asheville and Greensboro, North Carolina; Toluca and Tuxtula Guiterrez, Mexico; and Waco, Texas. Those changes follow cuts from IAH to Victoria and Beaumont, Texas, effective in Jul-2012.

Most of those markets are thin routes operated as United Express with 50-seat regional jets, with the exception of Victoria and Beaumont, which were operated on behalf of United by Colgan Air with 30-seat Saab 340 turboprops.

United in a study it commissioned showing the detrimental effects of international flights from Hobby warned that it would reduce frequency from IAH to about 30 domestic and international markets, warning routes at risk for losing service from the airport included San Jose, California; Charlotte, North Carolina; Louisville, Kentucky; and various destinations in Mexico, with Mazatlan, Mexico named specifically. United has an extensive presence in Mexico given the proximity of its Houston gateway to the country, and Central America (includes Mexico) accounts for roughly 54% of international seat capacity at IAH. 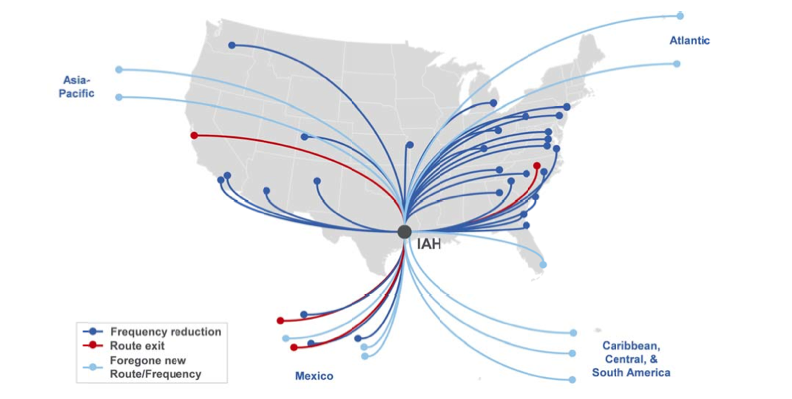 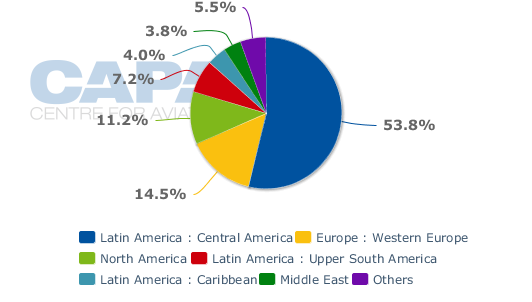 Both Toluca and Tuxtula Guiterrez are minor markets for United, as current schedules in Innovata show the carrier offers approximately 350 one-way weekly seats to Toluca and 100 to Tuxtula Guiterrez. Toluca is just 72km from Mexico City, where United has about 6000 weekly seats and competes with SkyTeam’s Aeromexico, which offers about 2100 seats. Houston is the only US city served from Tuxtula Guiterrez, which is in the Mexican state of Chiapas on the Guatemalan border.

Waco is the largest market included in the planned cuts in terms of number of seats offered by United, which is roughly 800 per week, one-way. The carrier operates 50-seat ERJ-145s on the pairing, and once it ends service to IAH, Waco will only have direct flights to Dallas/Fort Worth operated by American Eagle.

It is likely the routes United is cutting from Houston in Sep-2012 had been under-performing for quite some time, and the carrier is using the decision by the City of Houston to allow international flights from Hobby as an excuse to blunt the effects of the route eliminations. Both Asheville and Greensboro are likely better performers for United on service to O’Hare and Newark, as O’Hare provides better connections to destinations in the western half of the US and Newark offers access to the New York metro area. Delta offers flights from Greensboro to both New York LaGuardia and JFK.

Obviously passengers from those cities in North Carolina lose out on connecting service to Latin America through Houston, which is the reason United argued that it held on to some unprofitable routes with the hope a change in fortunes would occur. United’s logic is that passenger fragmentation on flights to Latin America created by the launch of international service from Hobby would render some routes unprofitable, claiming (in a highly simplified presentation) that only 1.5 passengers on a 50-seat jet generate a profit while the rest of the seats cover costs. The carrier estimates three-quarters of its customers on a flight from IAH to Latin America are connecting passengers, and passenger fragmentation between two airports would render some of its routes to IAH essentially unprofitable.

United’s fragmentation scenario could be a bit overstated as it is tough to imagine the connecting passengers on those regional jet flights would go through the hassle of transferring the 50km between the two airports for an international connection. There might be more of a threat of passenger spill from IAH if Southwest served Asheville and Greensboro from Hobby, but those markets are too small for the carrier’s narrowbody aircraft.

Long-standing service from Houston to Paris ends in Oct-2012

Another planned cut by United later this year is the elimination of daily flights from IAH to Paris in Oct-2012, a route launched by predecessor Continental Airlines in 1997 prior to the 2010 merger of United and Continental. United currently competes with Air France on its flights from Houston to Paris. Air France has the largest seat share in the market as roughly 2,400 one-way seats account for 59% of the total capacity in the market. United now accounts for the remaining 41%. 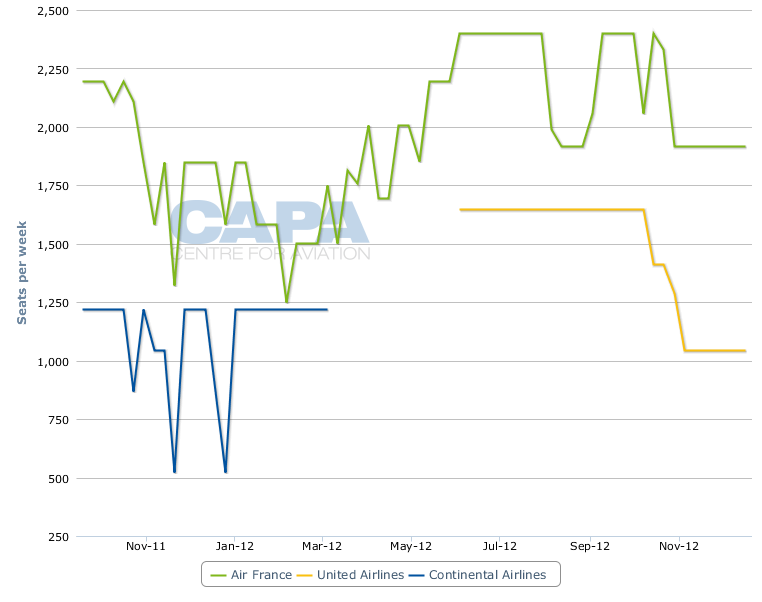 Air France and Continental used to be partners in the SkyTeam alliance, which created connections for the alliance to Latin America through Houston. But Continental opted to join Star Alliance in 2009 prior to its merger with United and after Delta and Northwest merged in 2008. Air France passengers can still connect to Mexico on flights from Houston by fellow SkyTeam member Aeromexico, and gain access to Aeromexico’s Latin American network that includes service to Bogota, Caracas, Lima, Santiago, Sao Paulo and Buenos Aires as well as extensive service to Mexican leisure destinations. Air France also offers its own direct flights from Paris to Bogota, Cayenne, Caracas, Lima, Santiago and Sao Paulo.

Data from the US Department of Transportation (DoT) show Air France’s average load factor on flights to Houston during 2011 was approximately 73%, while Continental’s loads to Paris (which includes flights from its Newark hub) averaged 77% for the year. (United and Continental did not start jointly reporting performance to the DoT until Jan-2012.) Continental’s higher loads to Paris were likely driven by its performance on flights to Newark, as that hub is a stronger gateway for trans-Atlantic flights than Houston.

United has strong enough demand for Paris originating in or connecting through Houston, but Paris origin passengers likely gravitate to Air France for flights to the US in order to build loyalty with France’s flag carrier and enjoy connections through the SkyTeam alliance. United passengers could easily be funnelled through east coast hubs instead.

United’s latest round of domestic cuts from Houston are unsurprising given those small markets do not bring a lot of connecting traffic to IAH. It is not clear whether those services were on the chopping block before the City of Houston ruled against United’s wishes in keeping international flights limited to IAH, but it is difficult to draw a connection in Southwest’s planned international service from Hobby, scheduled to begin three years from now, affecting the viability of markets that have likely been marginal performers in United’s network for quite some time.