The decline in airline stocks was despite a 0.5% decline in oil prices to USD75.42.

United and Continental to put merger agreement to stockholder vote

United Airlines (+0.9%) and Continental Airlines (+0.8%) edged higher after announcing plans to hold a special meeting of stockholders on 17-Sep-2010, to vote for the approval of their merger agreement.

Both carriers urged all stockholders to take part in the vote, as the proposals must be approved for the merger to go ahead.

American Airlines (-0.3%) slipped. During trading, the carrier announced plans to introduce Express Seats, enabling passengers to purchase seats in the first few rows of coach class, including bulkhead seats in that cabin. The Express Seats can be purchased via airport self-check-in machines from 24 hours to 50 minutes prior to scheduled flight departure for travel within the US, including Puerto Rico and the US Virgin Islands. Introductory pricing for Express Seats begins at USD19 per flight, with pricing based on distance.

Elsewhere, AirTran (+2.1%) and Alaska Air (+1.5%) were the day’s biggest gainers, while Hawaiian Airlines (-3.6%) fell back into negative territory. LAN Airlines (-1.6%) and TAM (-1.1%) were also down after recent rallies, as wider Latin American markets ended trading flat. 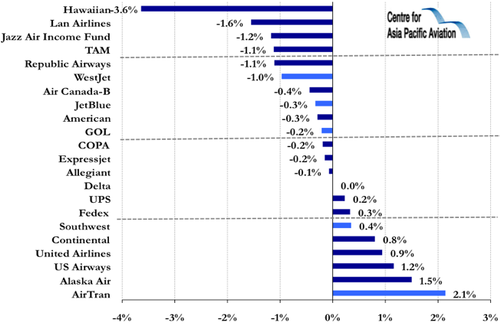