United and Continental CEO to give depositions for latest court case; Alaska Air up

North and South American airline stocks rallied on Tuesday (17-Aug-2010) as wider markets advanced on encouraging economic data and improved financial results from Wal-Mart. The Dow (+1.0%) was up after the Federal Reserve stated industrial production rose 1.0% in Jul-2010, while the US Government reported a 1.7% increase in the construction of new homes.

United and Continental CEO to give depositions for latest court case

United Airlines (-2.4%) and Continental Airlines (-2.1%) were down on news CEOs Glenn Tilton and Jeffery Smisek, respectively, are to give depositions later this month for class action lawsuit against the carriers’ plans to merge. A hearing on a preliminary injunction to stop the merger will be held on 31-Aug-2010. The lawsuit has been filed by a group of passengers who claim the merger will result in less competition and higher fares.

BTS reports another decline in employment at US airlines

US Bureau of Transportation Statistics (BTS) announced during trading that US scheduled passenger airlines employed 2.4% fewer workers in Jun-2010, the 24th consecutive monthly decrease in full-time equivalent employee (FTE) levels. According to US BTS, five network airlines decreased employment in Jun-2010 while Southwest (+1.4%) and AirTran (+2.6%) were the only LCCs to report a decrease in employees during the month. Details are as follows:

Elsewhere, Delta Air Lines (-2.4%) was the only other airline ending the session lower, while Hawaiian Airlines (+4.6%) and Republic Airways (+3.5%) also rose significantly. 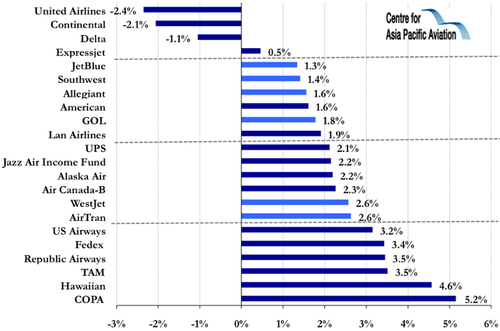