North and South American carriers’ stocks mostly made gains on Friday (19-Feb-2010). The Dow (+0.1%) was up as investors viewed the US Federal Reserve's discount rate increase as an indication banks no longer required assistance, and a recovery from the global financial downturn is strengthening.

However, another rise in oil prices (+0.5%), to USD80.24, prevented carriers from making any major gains during trading. The AMEX Airline Index (+0.9%) ended trading up.

LAN (-0.9%) and Republic Airways (-3.4%) were also down at the end of trading. Republic Airways' CEO, Bryan Bedford, told The Denver Post in an interview that a branding decision on Republic, Midwest Airlines and Frontier Airlines will be made in Mar-2010, to reduce customer confusion between the three.

United Airlines (+2.6%) rebounded from its recent slide. The carrier reportedly announced plans during trading to lay off 50 employees at its San Francisco International Airport maintenance base relating to plans to outsource its engineering work at the airport. 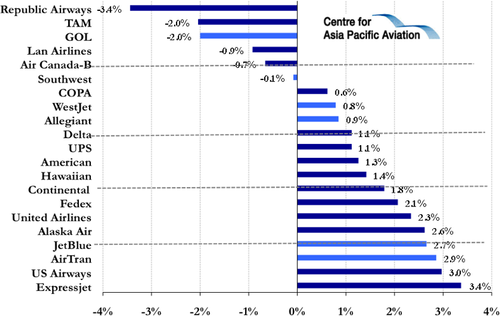