United Airlines is bracing for a unit revenue decline during 2Q2015 that could reach the mid single digits as internal and external factors are coalescing to drag down the company’s performance in that metric.

But United maintains that some drivers of the decline are both earnings and margin accretive, and stresses it ultimately makes decisions to maximise margins and return on invested capital (ROIC). To demonstrate that philosophy it has undertaken several fleet changes that include deploying 777-200 onto high frequency domestic hub-to-hub routes.

To mitigate some of the pressure it is feeling from the strengthening USD and competitive capacity actions, United has shaved a half-point off of its projected 2015 capacity growth and now expects a 1% to 2% expansion for the year as it works to shore up margins and sustain profitability.

United recorded consolidated revenue growth of 0.4% during 1Q2015 and an increase in yield of the same amount. Previously, the airline projected a fall of 1% to 1% growth. United anticipated that foreign exchange pressure due to the rising USD against many currencies would represent a 1ppt decline, an increase in stage length would generate a 0.5ppt decline and a shift in redemption tickets in its frequent flyer programme would also pressure unit revenues by 1ppt.

The trans-Atlantic was United’s best performing geographical entity in 1Q2015 as a 4.4% increase in yields help lift unit revenues 6.9% year-on-year. Its capacity in those markets dropped 5%.

United chief revenue officer Jim Compton remarked that the favourable performance was driven by United’s seasonal shaping initiative that involves managing capacity more on a seasonal basis. As a result, the airline opted to lower capacity in the trans-Atlantic during the lower demand winter period.

Mr Compton remarked that United’s capacity actions helped to offset some of the currency pressure that United faced in the trans-Atlantic markets, and estimated that F/X headwinds generated a 1.4ppt unit revenue headwind for United on those routes. United’s rival Delta increased trans-Atlantic capacity by 4% in 1Q2015, and its yields increased 1.4% while unit revenues fell 2.9%.

United’s domestic capacity fell 1.2% year-on-year during 1Q2015 as yields increased 3% and passenger unit revenues grew by 2.3%. Mr Compton cited re-banking undertaken by United in its Denver and Houston hubs as yields and the volume of connecting passengers in those airports increased.

To combat some of the pressure of decreased travel among corporate clients in the energy sector, United plans cut capacity in markets that are heavily dependent on the oil business. Data from CAPA and OAG for the week of 27-Apr-2015 to 3-May-2015 show that Houston is United’s largest hubs measured by seats and third largest measured by ASMs. 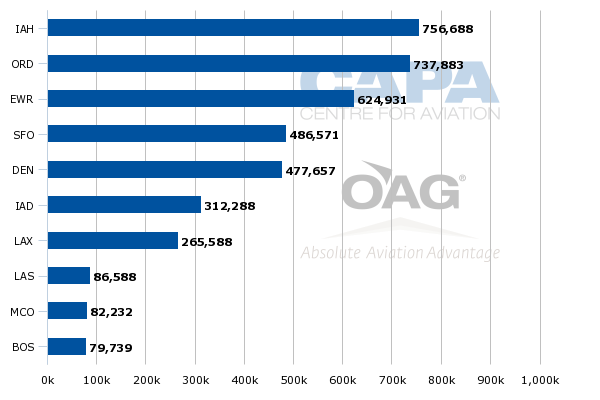 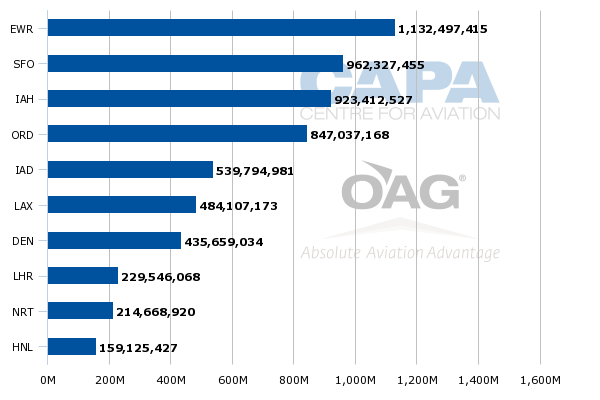 United’s Pacific results continue to be under pressure

United continued to post unit revenue and yield declines on its Pacific routes of 7.4% and 7.9%, respectively, as capacity increased 5.3% year-on-year. Weakening currencies contributed to roughly 2ppt of the decline.

An increased stage length accounted for roughly 2.5ppt of the decline, said Mr Compton, as United revamped its Asian short-haul network, opting to exit short-haul intra-Asian markets and instead work with its Japanese joint venture partner All Nippon Airways (ANA) to serve those routes. The short-haul intra-Asia flying has been replaced with new long-haul markets including Los Angeles-Melbourne and San Francisco-Chengdu. Mr Compton highlighted the network shifts are earnings accretive despite creating unit revenue declines.

In addition to United’s own capacity increases, Mr Compton stated that United faced competitive capacity pressure in China, a trend that has become a mainstay for the last few quarters. He estimated the increased capacity accounted for approximately 1.5ppt of the unit revenue decrease.

Data from CAPA and OAG for the week commencing 20-Apr-2015 show that one-way seats on offer between the US and China are up nearly 16% year over year. American has the largest increase among US airlines at 35%, followed by Delta at 14% and United at 8%.

American’s larger increase stems from new service added from DFW to Asia during the last year. Hainan has recorded a 71% jump and China Southern’s seats have increased 54%.

Mr Compton highlighted several reasons for the unit revenue decline, the largest – 3.5ppt – stemming from F/X pressure, the timing of the Easter holiday (which fell in 1Q2015) and lower fuel costs that are triggering a reduction in fuel surcharges.

United anticipates some of the currency pressure in the trans-Atlantic will be offset by strong US point-of-sale during the high summer season in the US as many Americans will travel to Europe to take advantage of the favourable exchange rates. Usually there is a general shift to US point of sale as “you head into summer”, said Mr Compton. But given the USD strength, “we’ll see that accelerate this year, and quite frankly in our bookings we are already starting to see some of that...we’re beginning to see those trends happen, they’re above the rate that they normally do”.

United anticipates that the fuel surcharge declines will account for a 1ppt drop in 2Q2015 unit revenues.

Data from CAPA and OAG show for the week commencing 20-Apr-2015 that United’s one-way seats on offer to Japan have dropped 16% year-on-year. Among its US competitors American seats have increased 2% and Delta has posted a 2% drop. Hawaiian’ seats have fallen 27%. 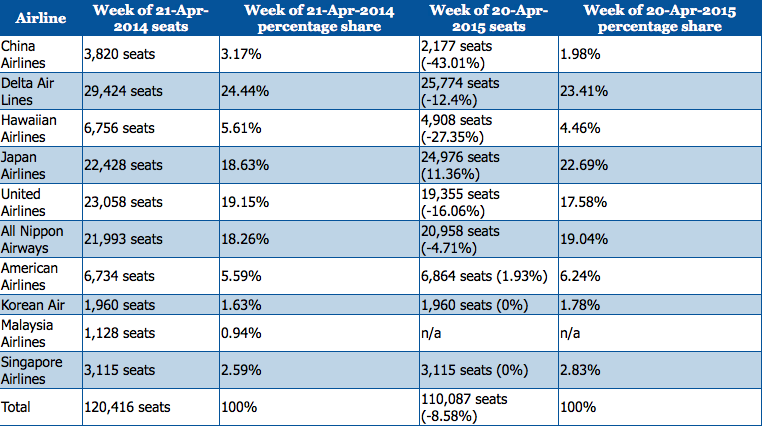 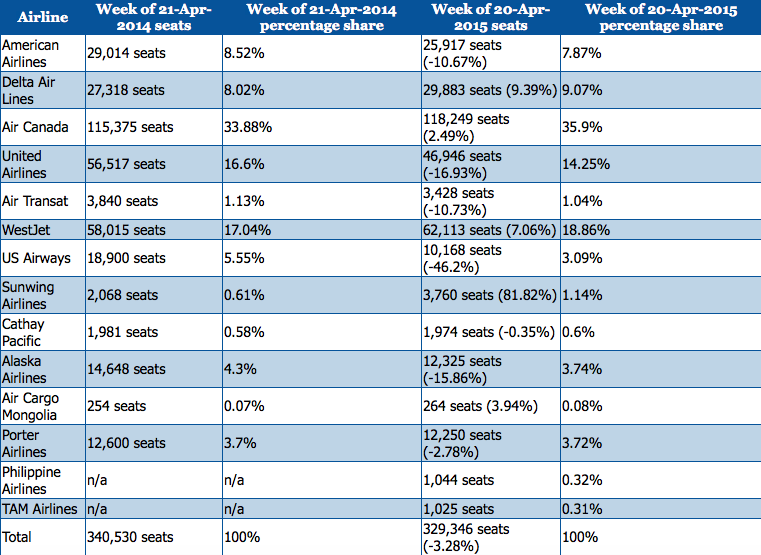 United estimates that network and fleet adjustments will affect unit revenues by 1ppt in 2Q2015. The main driver is the installation of slimline seats on several hundred aircraft. As of late Apr-2015 United has installed the seats on 385 aircraft and projects installations of 485 jets by the end of 2015.

Mr Compton reasoned that seats improve fuel efficiency, generate low marginal non-fuel unit costs and are accretive to earnings. “However the additional seats create a headwind to PRASM [passenger unit revenues] as they generate lower than average yields.” He emphasised United remains committed to the network and fleet modifications foster cost benefits, are accretive to margin and improve operational reliability.

The last component driving the decline in United’s 2Q2015 unit revenues of roughly 1ppt is a 6% rise in overall competitive capacity mainly in China, Hawaii and the trans-Atlantic.

United during the next couple of years is also undertaking fleet modifications that include the much anticipated exchange of 10 Boeing 787s for 10 777-300ERs with deliveries scheduled for 2016.

The airline is also opting to “extend the life” of all 21 767-300ERs with winglets and interior modifications that will allow United to re-position trans-Atlantic 757-200s into the domestic and Latin American markets.

At the same time United is reconfiguring and transitioning 10 777-200 international widebodies into the domestic network. The company has not indicated when the transition will take place, but state it would not occur in 2015. CAPA’s fleet database shows that United has 19 777-200s presently in operation. 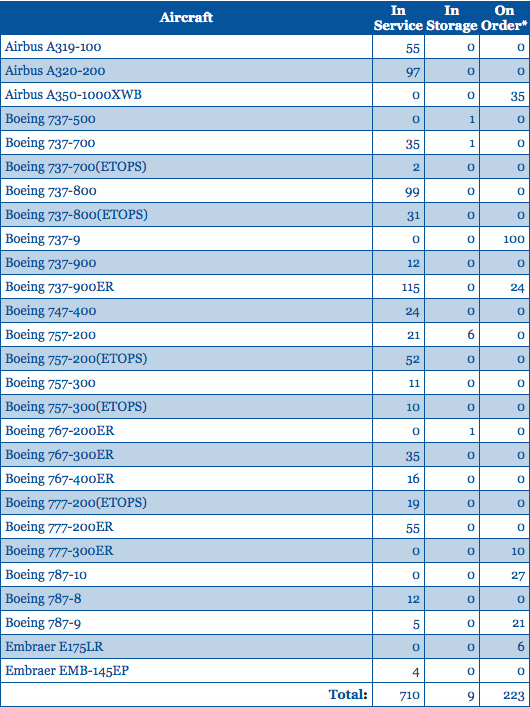 707" />
Source: CAPA Fleet Database
Note: *orders include those placed directly by the operator and by lessors assigned to the operator

Presently, United’s 777-200s are configured in a 266-seat configuration – 108 in Economy, 110 in Economy Plus, 40 in BusinessFirst and eight in Global First. The move to place the aircraft (reconfigured) into domestic service has seemed to raise concerns among some analysts about creeping capacity in the US marketplace, particularly larger airports.

United stresses that the larger gauge aircraft, which will likely lose Global First, will allow the airline to consolidate frequencies on hub-to-hub routes such as San Francisco to Chicago O’Hare, where the airline in some cases on red-eye flights operates departures within 90 minutes with three narrowbody jets.

Mr Compton remarked that the 777-200 transition would be seat neutral, and that United during the last eight years has aligned capacity growth at GDP or less, and indicated the airline has no plans to veer from that logic.

United is not alone in facing unit revenue degradation in 2Q2015

United CEO Jeff Smisek stressed that while unit revenue is an important metric, the airline ultimately makes decisions to maximise margins and shareholder value. It is a sentiment echoed by United’s US global airline counterparts as unit revenue headwinds for 2Q2015 are a industry-wide phenomenon. United expects its pre-tax margin to range from 12% to 14% in 2Q2015 up from 6.8% in 1Q2015, which is obviously a step in the right direction.

United is not alone in facing challenges that are dragging down its unit revenue performance in 2015. All of its US airline peers are forecasting unit revenue degradation during 2Q2015. It appears the overarching theme is that airlines are willing to trade unit revenue pressure for new business practices that sustain profitability and generate returns for increasingly vocal shareholders.