North and South America carriers’ shares tumbled on Monday (08-Feb-2010), as oil prices rose again, up 0.5%, to USD 81.87. The Dow (-0.1%) slipped as investors continued to assess the strength of the US economic recovery, following better than expected US jobs data on Friday.

United Airlines (-3.9%) shares also fell, despite estimating consolidated passenger revenue per available seat mile (PRASM) increased 17.0% to 19.0% year-on-year. The carrier added it has estimated to have lost USD40 million due to the Feb-2010 storms.

Allegiant (+2.7%) was meanwhile the day’s biggest gainer after stating it expects a 4% RASM improvement in Feb-2010, with a 2% increase in TRASM and a 7% upward movement in the total fare. The carrier also stated its plans to launch services to Hawaii are a "good fit", as it is the “largest major US leisure market untapped by Allegiant” and the market has "significant" ancillary revenue opportunities. See related article: Allegiant's Hawaii move a good one, but not until next year

In other news, fresh analysis from Robert Herbst shows that despite the global financial downturn, only about a billion available seat miles disappeared in the latest recession, translating to a big gain in share for the LCCs. See related article: Capacity did not decline much for US airline industry in recession 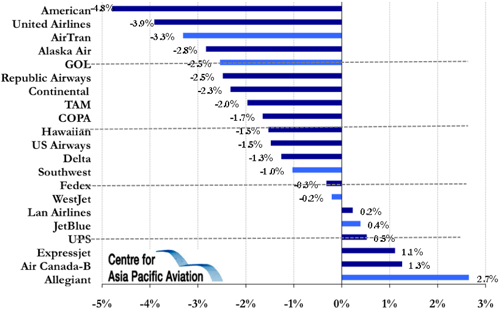