United Airlines, Delta and American shares surge as US airline stocks bounce back on fare rise

Major US airlines enjoyed a very strong day yesterday as the Wall Street casino roared back to life, retracing all of the start-of-week losses. Delta Air Lines (+9.0%), American Airlines (+8.4%) and United Airlines (+12.6%) have raised most domestic fares by up to USD20 return – the second increase in as many weeks – which suggests deep capacity cuts are finally having the desired effect.

The stock increases came despite a warning from IATA that the international airline industry was “a long way from recovery”. IATA reports North American international passenger traffic (RPKs) fell 10.9% year-on-year last month (considerably worse than the 4.2% reduction in Apr-2009), while May-2009 capacity was cut back by 6.6%, leading to a fall in average load factors to 73.3%.

IATA attributed the deterioration in demand to “weak demand to Latin American destinations affected by Influenza A(H1N1), along with significant recession-driven drops in both trans-Atlantic and trans-Pacific markets”.

Fare increases in international markets by US carriers could be some time off.

Elsewhere, US Airways’ shares also soared, rising 10.2% yesterday, while the enthusiasm over Republic Airways’ shopping spree subsided, with its shares dropping back 10.8% after spectacular gains earlier in the week. 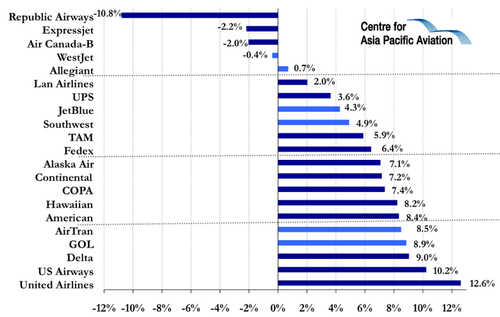