United Airlines fairly crowed about its accomplishments during one of the worst years in airline history. “Losses narrowed, liquidity strengthened, operational improvements,” ran the headline on its release. And it has reason to crow, as does the rest of the industry that has worked so hard to achieve major swings in losses last year.

The company experienced a net loss of USD176 million in the fourth quarter, a USD391 million improvement from the year-ago period. It also achieved break even on an operating basis. And of course, all this was excluding those pesky special charges.

For the full year, it posted a USD1.1 billion net loss ex charges, a swing of USD645 million year-on-year. It also reported a narrowing of declines in 4Q2009 PRASM, which dropped only 5.2% compared to the 14.7% decline in 3Q2009. In addition, mainline CASM was up 1.1% year-on-year ex charges on a capacity reduction of 6% in the quarter. Mainline CASM, including fuel and excluding non-cash, net mark-to-market fuel hedge gains and certain accounting charges, was down 9.0% year-over-year. GAAP mainline unit cost, including these items, was down 19.8%.

After achieving 10%+ operating margins in 3Q2007, United’s margins are still in negative territory 4Q2009 after briefly flirting in the positive range earlier in the year. 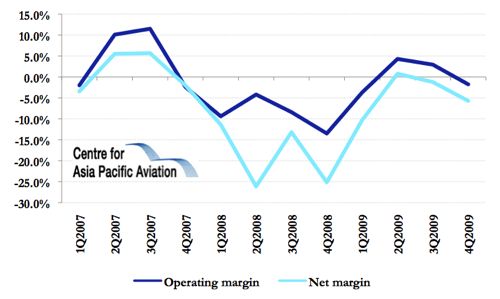 UAL Corporation Chair, President and CEO Glenn Tilton pointed to the results as proof of progress. "This has been a year of solid progress against our priorities of building network strength in key geographies, creating and maximizing revenue opportunities, and improving operational performance and customer satisfaction metrics,” he said, adding, "we have established tight cost control across the company, and, with strengthened liquidity, we are well positioned to continue to take actions to create a stronger United and improve our competitive position."

Ancillary revenues grew 4.9% in 4Q2009 to USD214 million and for the year it was down 8.8% to USD825 million. However, United includes first and second bag fees and ticketing and change fees in passenger revenue, not “other revenue,” masking the total revenue from such products. Even so, increases in these fees resulted in a 0.4 percentage point improvement in consolidated PRASM year on year.

It pointed out the lack of consistent industry practice on classification of ancillary and other revenues. “Some ancillary revenue products, such as premium seat up-sell revenues, are consistently recorded by most airlines as passenger revenue,” it said. “Certain other ancillary revenue products, such as first and second bag fees and ticketing and change fees, are classified by some other carriers in other revenue.” Last year, United had pledged more transparency on the subject but has, so far, not delivered.

While mainline posted passenger revenue of USD3.0 billion in the quarter, a decline of 12.1%, United’s regional affiliates contributed USD812 million to the top line, up 8% from the year-ago quarter. However, regional PRASM declined 7.8% on a 17.2% increase in capacity compared to a PRASM drop of 6.4% for mainline operations on a 6% capacity decline.

Focusing on cost reduction, the company said that expenses, including fuel, were down USD4.6 billion from the year-ago period for 2009. With the cost reduction in non-fuel areas, United achieved a savings of USD963 million or 7.5%. For the quarter, regional affiliate costs rose 6.1% to USD785 million, resulting in a positive gain of USD27 million from United Express operations. For the year, 9.5% of costs were squeezed out of the Express program as costs came in at USD2.939 billion leaving a USD925 million gain on the program.

Costs began outpacing revenues in 4Q2007, but the company has recently closed the gap. 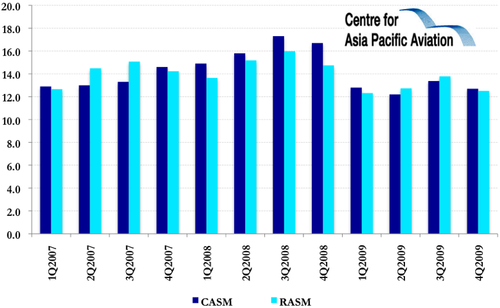 For the full year, mainline CASM declined 0.6%, despite a 9.7% decline in mainline capacity. Consolidated CASM, ex fuel and certain accounting charges, increased by only 1.0% year on year during 4Q2009 despite a 3.4% decline in consolidated capacity.

United was the second carrier to mention airport rents and fees and Tilton made a point to saying they will be a cost headwind of 0.8 ppts year-on-year in 2010. “In addition to the broader impact that lower capacity has on airport rent and landing fee rates,” he said, “we are experiencing significant rate increases due to debt service increases with the completion of two new runways at Chicago O'Hare, as well as major airport infrastructure projects at Washington Dulles.”

"We have clearly taken the liquidity issue off the table, having improved our unrestricted cash balance by more than USD1 billion and, through our refinancings, significantly lowered our fixed obligations over the next few years," said CFO Kathryn Mikells. "With business and premium traffic strengthening and the benefit of an improved cost structure, we are well on the road to closing the profitability gap."

The company expects both mainline and consolidated CASM, excluding fuel, profit sharing and certain accounting charges for the full year 2010 to be up 2.0% to 3.0% year-on-year, driven by unit-cost pressures in revenue-related expenses, airport rents and landing fees, Annual Incentive Plan accruals in 2010 and accelerated aircraft depreciation. It did not make any incentive plan expenditures in 2009.