United Air ramps up promises of improvement despite a glaring 1Q2014 loss; management under fire

Few were surprised by United’s 1Q2014 loss as the carrier recently warned that severe winter storms would take its toll on quarterly results. But its fellow legacy carrier American cancelled nearly as many flights as United, yet managed to post strong quarterly profits despite the tough operational challenges.

United has spent most of the last year on the defensive over when it will turn the corner to consistent revenue generation on par with its peers and towards sustainable profitability. The airline that has constantly touted the supremacy of its network is now fielding questions over the lack of revenue its hubs generate as investors try to grasp onto any concrete reason why the carrier continues to struggle.

The airline contends no structural issues are responsible for its dismal performance. Instead, it maintains, it is simply continuing to eliminate lingering inefficiency from the merger between United and Continental. True to form United continues to promote several initiatives to improve its fortunes, but the rhetoric is wearing thin with analysts. 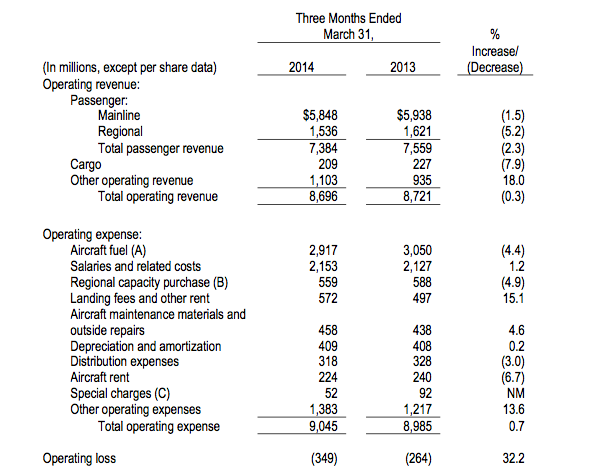 As its unit revenue growth has underperformed its peers during the last year, United has often touted its overall greater recorded passenger revenue relative to other US carriers.

At the end of 3Q2013 United touted a PRASM premium of 14.9% compared with the average PRASM recorded by members of trade group Airlines For America (all the US major carriers are members of the group). However, for CY2013 United's consolidated PRASM of USD13.50 cents remained lower than American's USD13.67 cents and Delta's USD14.15 cents.

During 1Q United recorded a consolidated PRASM of USD12.91 cents compared with USD13.67 cents at American and USD14.24 cents at Delta. So not only is United’s sub-par revenue growth continuing (or in the case of 1Q2014 sliding), but its overall unit revenue performance continues to lag. 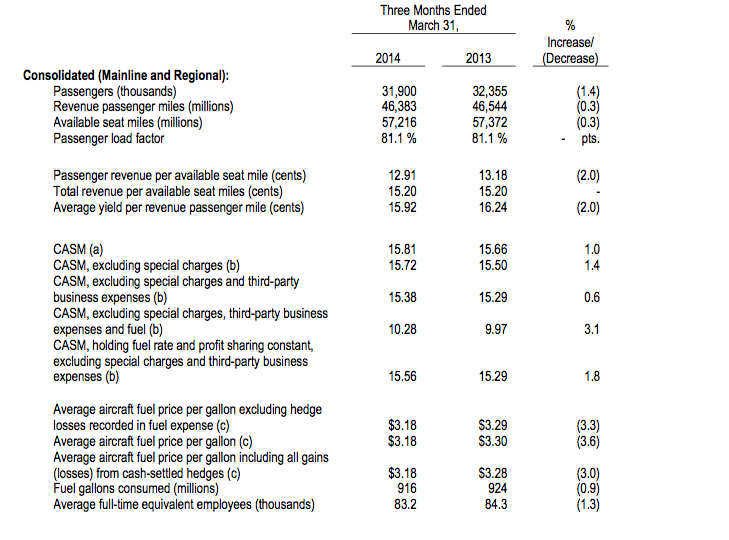 On a geographical basis, United recorded decreases in yields and unit revenues in 1Q2014 in all of its international regions, with the Pacific emerging as the carrier’s worst performer.

United highlighted the now-familiar challenges it faces in Pacific markets – the weak Yen and pressure from competitive capacity increases. No relief seems to be in sight for the near term as United expects capacity between the US and China to grow 20% during 2Q2014, and warns the capacity pressure, coupled with the still-weak Yen will drag its consolidated passenger unit revenues down by one to town percentage points in the quarter.

The airline has taken steps to shore up its Pacific performance by cutting certain connections through Tokyo. During 2014 it is eliminating flights from Tokyo to Bangkok, Taipei and Hong Kong and downgauging service from Tokyo to Seoul. It also plans to eliminate flights from Seattle to Tokyo, a market where Delta is dominant.

But neither of those initiatives is likely to provide relief to United in the short term, which means its Pacific results will continue to be a drag on its lacklustre unit revenue performance.

United also has a plan of action to improve its revenue performance as Mr Compton reiterated changes the carrier is making to its revenue management system to maximise close-in, high yield bookings, which he expects to drive 0.5ppt improvement in the carrier’s 2Q2014 unit revenues, which United projects will rise by 1% to 3%.

Another change the carrier is undertaking is revamping flight banks at its Denver and Houston hubs to shorten connection times. Most of the changes in those hubs are expected to occur by year-end. American, which is just weeks into the American-US Airways merger, is already undertaking similar changes in its Miami, Dallas/Fort Worth, and Chicago hubs. Perhaps United is taking cues from the recently merged carrier as it has encountered countless missteps in its own integration.

Mr Compton also highlighted a recently-launched initiative to improve sales of premium cabin seats on some of United’s domestic and short-haul international fights at the time of booking. He reasons the more dynamic pricing should further improve PRASM.

United is also up-gauging aircraft on routes where demand is higher to better match its supply-demand balance, which it argues should help drive an increase in US domestic passenger revenues by 4% to 6% in 2Q2014. The carrier’s unit revenues in its domestic markets grew 0.2% year-on-year as yields increased 1.4%. That compared with domestic unit revenue and yield growth of 7.4% and 5.3%, respectively, at Delta. American’s domestic yields in 1Q2014 increased 5.6% and passenger unit revenues grew 6.3%.

Addressing the corporate sector has become a vital part of the majors' yield strategies. For example, as noted in CAPA's reports on American and Delta's results, "American’s corporate revenues increased in the mid-single digits year-on-year during 1Q2014"; and "Delta’s strong performance in US domestic markets was attributed to a 6% rise in corporate demand".

All of those initiatives are seemingly logical, and beg the pertinent question of when United will ultimately improve its revenue performance relative to its peers.

Without giving a definitive timeframe Mr Compton pledged that United would close the gap, while carrier CFO John Rainey stressed that the carrier was “more more focussed on closing the margin gap. And some of the decisions we make are may be RASM dilutive, but profit maximizing”.

Challenged even further if United’s problems were structural – particularly if the carrier faced a higher level of competition at its hubs compared with  American and Delta – United CEO Jeff Smisek argued that the issues stem from maximising operational integrity, tuning revenue initiatives and eliminating leftover inefficiencies from the merger.

Analysts are raising questions about leadership at United

Questions are now being raised over whether a leadership change at United is necessary. Few of the initiatives executives are touting are new; for nearly a year the carrier has been highlighting all the levers it is pulling to improve revenue, with arguably no visible results.

In fairness it does take some time for some of the benefits from United’s efforts to improve performance to flow through the company.

But investors are running short on patience as United’s peers seem to be on a reasonable path to sustainable profitability, pointing to the very different place that Delta is managing to arrive at.

There is not yet a crisis, but pressure is mounting for a change in mindset among the airline’s executive ranks, particularly if United fails to deliver improved results in 2H2014.