Oil prices rebounded overnight to just under USD100 per barrel in New York, as the market responds to various external shocks. Middle East tensions have pushed oil prices higher this year, though the unfolding crisis in the world's third largest economy, Japan, is putting downward pressure on oil. Airlines are caught in the middle - on the one hand facing up to significantly higher costs, and now the potential for revenue/demand-side pressure as fresh questions are raised about the global economy and consumer confidence. We have entered a period of considerable volatility.

Travel patterns will most certainly be disrupted over the short term, with the likely near total avoidance of travel to Japan. Most international airlines are responding by operating full schedules to and from Japan and some have deployed larger capacity aircraft in response to rising numbers of passengers wishing to leave the country.

A number of carriers have adjusted their schedules to minimise overnight stops and related crew changes in Tokyo. A Chinese carrier, Spring Airlines, has announced plans to suspend services to Ibaraki Airport, northeast of Tokyo, for the remainder of the month because of the radiation scare.

Looking ahead, the Association of Asia Pacific Airlines (AAPA) stated, "we can expect some short term disruption to normal patterns of travel demand to and from Japan", adding airlines will continue to closely monitor the situation and make appropriate adjustments as necessary." AAPA said it believes the Japanese people will "demonstrate great resilience in the face of the current crisis and quickly restore confidence."

IATA stated it is too soon to judge how the Japanese earthquake and tsunami will affect air travel, but added, "the Japanese market is large enough to have a materially adverse impact on the international total for that month [Mar-2011]". "Japan has been a relatively slow growth mature economy in the Asia-Pacific region but premium travel is significant...Japanese markets represent 6-7% of the global total," IATA added.

Tokyo Narita Airport is a major premium hub. Some 13.4% of its total weekly capacity is in First or Business Class - more than double the worldwide average of 6.2%, according to Innovata. 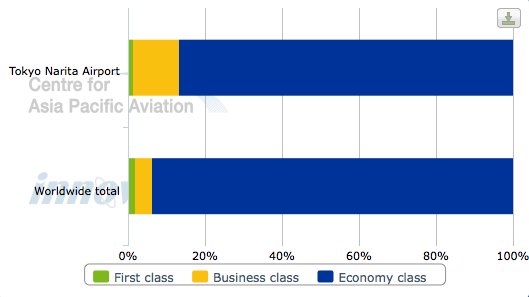 In a significant move, Japan's Ministry of Transport announced Sendai Airport's runway resumed operations late on 16-Mar-2011, after being cleared of debris swept in by the tsunami. The runway will have a usable length of 1,500 m. From 17-Mar-2011, the airport will function as the 24-hour base for rescue activities of the Japan Self Defence Forces and the US Military, handling rescue and relief goods. 24-hour helicopter rescue and relief operations resumed on 15-Mar-2011.

Sendai is regarded as the capital of the Tohoku region and the re-opening of this key airport will be a major factor in future rehabilitation of the region in the weeks and months to come.